Both members of the Ripon Police Department, Officer Kaylee Haring ’18 and Sgt. Lindsey Gorske Michels ’04 were recognized for their work in a child sexual abuse investigation involving multiple victims.

Haring primarily works as a patrol officer. Michels, as a sergeant on the night shift, supervises officers and dispatchers, and also oversees investigations within the department and on work patrol.

“Winning this award alongside Kaylee is very humbling,” Michels says. “She fully embraced the investigation.”

Haring adds, “It was an absolute honor to be able to work the case with Lindsey. She is as bright as they come, and has a lot of knowledge and experience in the field. Lindsey is the epitome of what hard work looks like. I couldn’t think of a more perfect person to work alongside on a regular basis.”

Before overseeing investigations, Michels was an investigator for the police department for eight years, and notes how intense the process is, from collecting evidence to obtaining search warrants. Haring adds that investigations are dynamic and require meticulous attention to detail. A strong partnership is also important for investigations, and Michels and Haring get along well on and off the job.

“Lindsey is not only my sergeant, but my partner on the road,” Haring says. “There is a lot of trust and expectation built into our working relationship. We share a lot of similarities in work ethic and detail as well, probably because of the standard Ripon College had instilled in us.”

Michels looks up to the younger officer, as well, and is thrilled to have another woman working on the force. “Working with Kaylee is wonderful,” she says. ‘Working with a fellow Ripon graduate has been gratifying. Kaylee has a great work ethic, and she is a compassionate and dedicated officer. I really enjoy working and collaborating with her.”

Although the two never crossed paths at Ripon College, this is where both discovered their passions. Michels graduated with a self-designed criminal justice major and a leadership studies minor. At Ripon, she played on the varsity basketball and varsity softball teams, participated in intramurals and Circle K, and was a Student Support Services peer contact, senior class fundraising officer, and student intern.

“The relationships and friendships that I made both on and off the court/field are rewarding from my time at Ripon,” Michels says. “(I still benefit from) the connections that I made in the classroom, the well-rounded education I received, and the community that Ripon College has created to support both students and alumni.”

Haring majored in biology and finds that classes she took in sociology and psychology still give her perspective and insight directly related to her career. She was also on the women’s soccer team, all while raising an infant and working full time as an emergency medical technician in Fond du Lac County.

“What I’m forever grateful for from Ripon was learning how to work hard for what I wanted,” she says. “I’ve built fantastic friendships with my peers and teammates that I still have to this day. I was even hired with RPD shortly after my final semester — ultimately creating my future — because of an internship I did for a sociology class.”

Michels says their investigation was true teamwork between the department, other law enforcement agencies, the Department of Social Services and the Fond du Lac County District Attorney’s office to bring closure to the victims of the case. 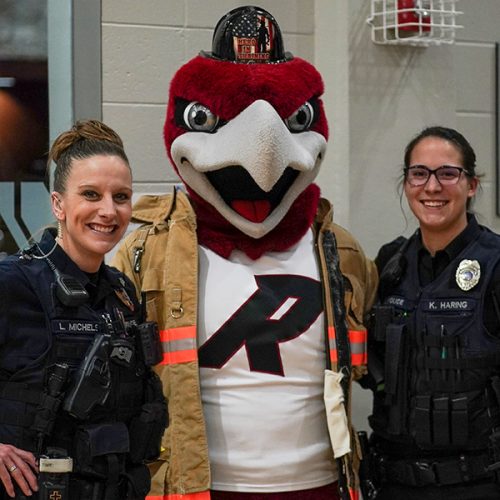