The exhibit will run from Sept. 4 through Oct. 9 in Caestecker Gallery in C.J. Rodman Center for the Arts. The physical exhibit on the campus is not open to the public, but a virtual exhibit with notes by the artist can be viewed at ripon.edu/Orimo at the conclusion of the artist’s talk Friday evening.

A Zoom webinar for the opening reception and an artist’s talk will begin at 7 p.m. Friday and can be accessed here.

Orimo works primarily in installation consisting of text, drawing, objects, video and sound that explore gap, slippage and “a realm of disjunction.” Using the concept of storage/archive as her framework, Orimo explores the relationship between public memory and private space by examining how memories are shared and internalized; how they are stored and become stories; and, how memories and history collide.

“In whatever form ‘slippage’ takes —physical, political or cultural — we become sensors and experience the slippage as shifted sense of equilibrium,” Orimo says. “Then, in trying to regain balance, we notice, remember, observe, measure, witness, suspect and probe. Some look at nature with inquisitive eyes; some pay attention to a subtle shift in use of language; some become activists; some bring themselves together as a community of learners.”
She adds, “Being an immigrant and having to navigate my daily life in a space of between-ness, this gap space is also a vantage point from which I view and probe what surrounds us.

For the group of works featured in this exhibit, Orimo researched government documents, institutional reports, historical narratives and personal communications. “They are available for public consumption, yet, at the same time, these communications are about what is absent, hidden and redacted,” she says. “I have re-presented these communications deploying various material strategies in order to reveal what lies between ‘shown and hidden.’ Together, this collection of my recent works examines the nuances of communications and censorship.”

Orimo was born and raised in Tokyo, Japan. After receiving her degree in literature and studying graphic design in Japan, she immigrated to the United States in the 1980s. She has received the Ohio Arts Council Individual Artists Fellowship/Individual Creativity Excellence Award four times, was awarded residencies at the Headlands Art Center and SPACES Gallery’s SPACES World Artist Project, and has exhibited extensively, including at the National Museum of Women in the Arts, Washington, D.C.; San Bernardino Art Museum, California, Apexart, New York City, and numerous venues in Ohio.

(Photo: “The Day Before Tomorrow”) 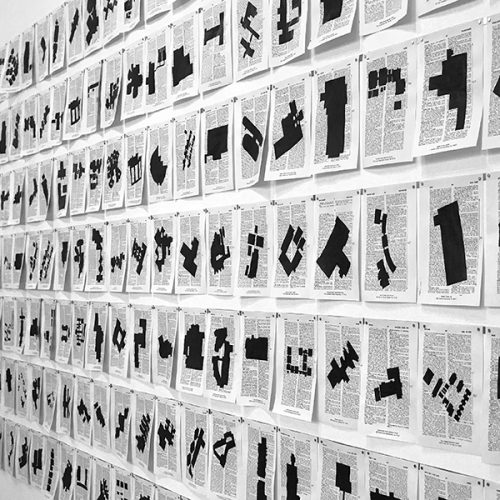