“Homesickness: On Longing and Loss,” a virtual exhibit of work by multidisciplinary artist Whitney Sage, will run Nov. 6 through Nov. 24. Sponsored by Ripon College, the exhibit will be on view at ripon.edu/whitney-sage.

The artist will give an opening talk via Zoom at 7 p.m. Friday, Nov. 6, and the link also can be found at ripon.edu/whitney-sage.

Sage is an assistant professor of art at North Central College in Naperville, Illinois, and her work includes painting, drawing, sculpture, fibers and installation.

“As a native of the suburban Detroit area, the rich cultural heritage of Midwestern cities and their relevance to the ‘American way of life’ are things that I’ve always found influential to my artwork as well as inextricably linked to my identity as an artist and image maker,” Sage says. “Midwestern cities are places of increasing cultural relevance with parallels to larger American struggles, big industry and suburban migration leaving behind empty storefronts, ghostly architectural skeletons and scarred empty plots of land.”

She says she depicts the city as subject matter to create an open dialog about tough histories and the lenses through which communities view each other, and to address the history and current struggles of rust belt communities and related emotional crises of identity, loss and homesickness.

“In attempting to connect viewers of the work to the issues surrounding the city on a personal level, my work often has allusions to the domestic interior of the home as a metaphor for the psychological interior, the root of emotional longing and nostalgia for place,” Sage says. “While my practice is rooted in a deeply personal experience growing up in a rust belt city, the work seeks to appeal to many through universal notions of home, loss, hope and the protective impulse that we share for the people and places we love.” 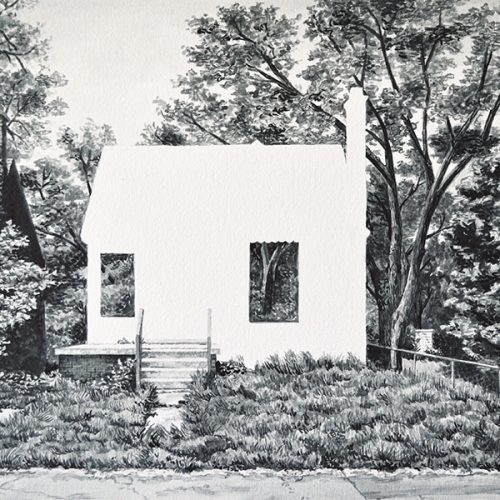