An 1883 oil on canvas painting of Ripon College founder Jehdeiah Bowen has been donated to the College by Erika Doss ’78 and Geoffrey Thrumston ’78 of South Bend, Indiana. The artist is early Wisconsin painter Mark R. Harrison. The portrait is now hanging in the Ripon College Museum in West Hall.

Thrumston is a descendent of Bowen. “He is my great-great-grandfather,” Thrumston said. “At some point, every person in my family line had something to do with Ripon College, ever since 1851. Last year, my father (Richard Thrumston ’47) died, and picture came to me. Since Ripon College is important to me and important to my father, the obvious place for it to go was to Ripon College.”

Bowen (July 19, 1817 – Nov. 18, 1891) was born in Llanelly, Brecknockshire, Wales, and moved to the United States in 1830. He was one of the earliest settlers of Fond du Lac County and was instrumental in the founding of Ripon College and the Republican Party.

The book Ripon College a History, by Robert Ashley and George H. Miller, states: “Bowen was a Welshman who came to the united Sates in 1830, clerked in an eastern Pennsylvania store owned by (David) Mapes and later decided to follow his former employer to Wisconsin, arriving in Ripon in 1850. Among his successful business ventures was a knitting works that survived until the late 1960s, occupying the corner of Watson and Seward Streets, where Ripon Drug now stands. He was active in politics as (Alvan) Bovay’s chief ally in forming the Republican Party in Ripon, as mayor of the city, and as a member of the state legislature. Of the original Lyceum (a precursor of Ripon College) directors, he served on the college board longest, until 1882, during which time he twice served as treasurer, 1855-61 and 1965-82.”

His home was on the western edge of what is now called Bowen’s Woods, where Scott Hall is located. The land was owned by Bowen until 1880 and was given to Ripon College in 1929.

Harrison (1819-1894) was born in Hovingham, England, and immigrated to the United States in 1822. In 1849, he moved to Oshkosh and briefly ran a steamship line with his brother. He then moved to Fond du Lac and worked as an artist there until his death. 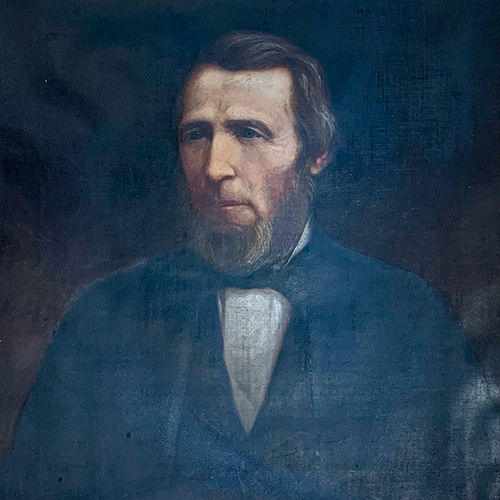