The jazz album “Under the Venus Moon,” featuring songs by Mario Friedel ’88 of Chippewa Falls, Wisconsin, reached the ballot portion of the nomination process for the Grammy Award for Best Jazz Album of the year.

While the album did not make the final cut, it did place among the top 78 entries out of 10,000 submissions. The Grammy Awards will be presented Sunday, April 3.

“Under the Venus Moon” can be listened to at stellarsound.net, Spotify and most streaming platforms.

He says getting so far in the Grammy nomination process was an honor. “It was amazing,” he says. “It was really something at my age and gave me a lot of confidence. It’s very touching to have so many fantastic performances on the record, and to know other people believe in it, too, is something new for me. I don’t take it for granted. It validated my songwriting career.”

It also was encouraging that the album was fully funded by a grant. “That was cool,” he says. “I had a record deal!”

Both the Friedels are longtime musicians and music educators. He was an elementary school principal and school district administrator in the School District of Ladysmith, Wisconsin, was named Administrator of the Year by the Wisconsin School Music Association and served on its Board of Directors. He now is a principal and teacher at St. Joseph’s Catholic School in Stratford.

Sherry Friedel taught music at all levels in the School District of Ladysmith and now teaches elementary music in the Chippewa Falls School District.

Friedel also has been writing songs and performing his entire life. He says early encouragement came through Professor Emeritus of Music Kurt Dietrich when Friedel performed a set in a Fond du Lac tavern as a class project. “Kurt brought the entire class down there to hear me,” Friedel says.

He is working on a couple of new songs that he will record in a few weeks: “The Answer’s in the Palm of Your Hand,” about people relying so heavily on electronics now; and “Olive Branch or Olive Green,” a reworking of a song written by his late brother, Jim, about his experiences in Viet Nam.

Friedel’s songwriting continues. “It’s something I know how to do,” he says. “It’s a way for me to express myself. It’s an art form.”

He and Sherry together perform in the group Songa, which reflects the Americana styles of folk, blues, country and jazz. Videos of song selections can be heard on their website songaduo.com. A new original folk/bluegrass album by Songa, “Sunshine in the Rain,” was released in late 2021. It features the Friedels along with an upright bass and fiddle.

The last performance of their season will be in October at the Thelma Sadoff Center for the Arts in Fond du Lac, Friedel’s hometown. 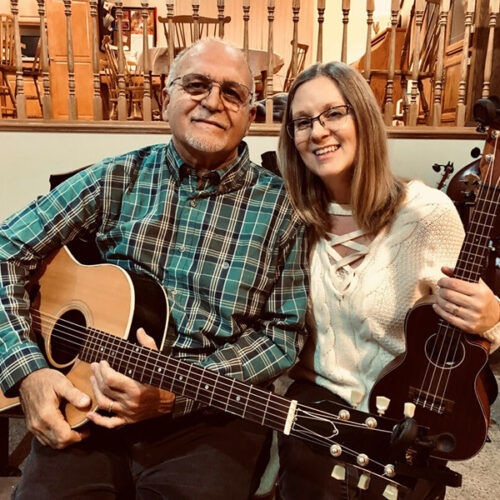