Austrian Heinz Seitinger, the former Trade Commissioner for Austria, will talk about his experiences related to the promotion of international trade March 4 at Ripon College. “Trade Promotion the Austrian Way: A Personal Journey” will be presented from 4:30 to 5:30 p.m. in Great Hall on the Ripon College campus. The presentation is free and open to the public.

The visit is sponsored by Ripon College’s the Center for Politics and the People.

A graduate of the University of Toronto and the Johns Hopkins University School of Advanced International Relations, Seitinger has served in various roles at the Austrian Federal Economic Chamber in Austria and abroad for nearly four decades. His international experience in developing countries in Asia and Africa introduced him early on to the challenges of economic development. He contributed to the development of formal institutions and informal networks of entrepreneurs. His initiatives led to lasting networks that contributed substantially to the success of Austrian business abroad.

The second half of his career was more focused on North American markets, where he built up various Trade Commissions in the Midwest and Southeast, including at the Austrian Embassy in Washington, D.C. In 2002, Seitinger returned to Austria where he joined an agency of the Ministry of the Economy to promote Austria as a business location. This work led to his position as founder and CEO for a satellite telecommunications startup.

Since 1972, Seitinger has been a member of Rotary International and has contributed to clubs from Khartoum to Vienna. He co-founded the Austrian-Canadian Society, of which he is president. He holds numerous honors for the promotion of Austria, as well as many honorary citizenships from the cities he has visited throughout his career. He lives in Vienna with his wife, Karin. His daughter, Susanne, lives and works in Boston, Massachusetts. 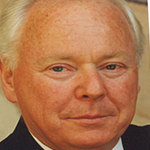