Considering that she is arguably the fastest player on Ripon College’s softball team, ranking in the program’s top 10 for career stolen bases, Korrine Peterson’s Red Hawks career got off to a slow start.

With just minutes remaining in the final practice before the team’s season-opening game during her freshman year, Peterson broke her ankle on a slide into second base. That caused her to miss her entire first year with the team, giving her a new perspective on many things.

“After that injury, I had a whole new mindset about the game and how to approach it,” she says. “Watching an entire season from the dugout made me realize how quickly things can change. Softball has been my entire life, so watching it come to a halt really hit me hard. It made me realize that softball is supposed to be fun, so for the last three years that’s how I’ve played. I just go out there to enjoy my teammates and the game that I’ve loved for so long.”

Now a senior weeks away from earning her degree in English, the Burlington, Wis. native completed her final season with the Red Hawks, where she led the team in both steals and runs scored. In the three years since her injury, Peterson has a career batting average of .255 while playing four different positions in the field (third base, shortstop, second base and centerfield).

“When I was fully healed, I appreciated the game so much more,” Peterson says. “As much as I hated dealing with my injury, it made me love being on the field even more than I did before. And has really helped me stay focused and grateful for the opportunity to play softball.”

Perhaps the most important attribute Peterson brings to the field is her speed. Despite missing one full season, she still ranks fourth in program history for career stolen bases (26). That includes 15 steals last season, which led the Midwest Conference and ranked 89th in all of NCAA Division-III, while being tied for fourth in school history for a single season.

“Knowing that my name is in the record book is a great feeling because I never thought I’d accomplish that during my time at Ripon,” Peterson says. “It wasn’t until I came here that I realized I had the ability to steal as many bases as I have.”

“I was shocked when I learned that I had been named to the All-Conference Team,” Peterson says. “I felt that I put in a lot of work during the off season to improve my speed and worked a lot on hitting, but I didn’t really see the success in myself that others may have seen, so it was a great surprise.”

Learn how you can support our campaign to revitalize our athletic, health and wellness facilities for all students. 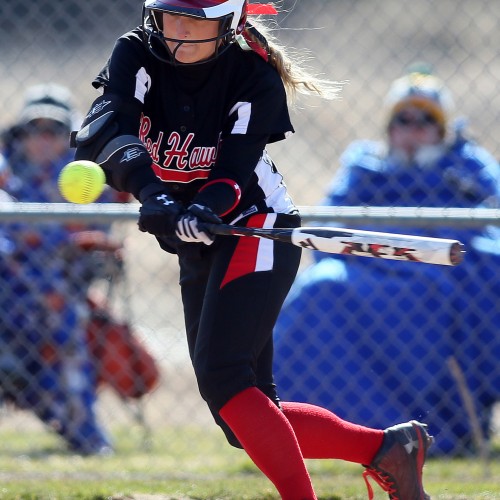