The popular The Hunger Games franchise provided recent graduate Zachary Conners of Hollandale, Wisconsin, with a focus for his senior seminar topic.

Conners’ research investigates how socioeconomic status determines deviance in The Hunger Games universe, and how deviance and disability are linked. In The Hunger Games series, there are those with a high social and economic status, and those of lower status. A significant portion of the series revolves around rebellion and oppression, and Conners looked into how all of these elements interacted.

He first became interested in The Hunger Games while he was a student in high school. “I heard about the books and checked the first book out from the school library,” Conners says. “I read it in two days.”

Conners, who was a self-designed media studies major, used his knowledge of English and sociology while investigating both the books and films. He looked at how bodies and appearance norms were shown in the movie, as well as how elements of classism and Marxism play a role in the story.

The first book of The Hunger Games series was first published in 2008. Connors says he enjoyed studying newer media because “it was exciting and already interesting to me. I wasn’t forcing myself to research.”

However, he says, there were some drawbacks with studying newer media. “Some people question the validity of this literature, but that was part of why I wanted to do it — to show that contemporary work has equal value to the classics.”

By studying newer media, Connors also struggled with researching in other ways. Oftentimes, older literature has been analyzed multiple times, but with newer media there is less established work. This lead Connors to research social status and deviance and interpret the franchise on his own.

With his Senior Seminar presentation, Connors says that he hoped to demonstrate that newer literature and media are just as valid as older media. “People shouldn’t discredit newer works so easily,” he says. “It’s important to look at contemporary works as well. Just because something is popular doesn’t mean it lacks merit.”

The Ripon College music ensembles will perform their holiday concert Sunday, Dec. 5. The program will begin at 3:15 p.m. in Demmer Recital Hall, C.J. […] 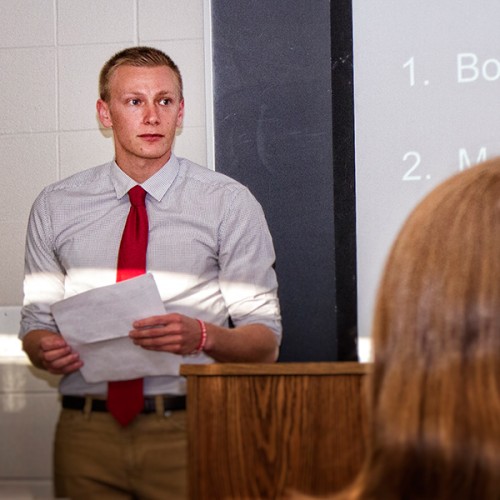