As a result of the Ceramics II class, a decorative sink has been installed in the women’s restroom at C.J. Rodman Center for the Arts. The sink was both designed and assembled by ceramics students using tiles made by the students in the class taught by Associate Professor of Art Mollie Oblinger.

Sara Strieter ’17 of Nashotah, Wisconsin, one of the students in the class, said each student created a design and submitted it to art staff to judge. Her design was the one selected.

The process did not actually begin with the many small tiles you see today, Strieter says. “Instead of making hundreds of tiny tiles by hand, we instead made flat slabs of clay. This was a challenge, as many of the slabs warped when fired in the kiln, and dozens were thrown out. After enough quality slabs were fired, students took turns breaking the slabs apart with a hammer to make the small tiles seen in the final design.

“My specific role in tile-making was to collaborate with a fellow student to make the wing tiles on both the far sides,” Strieter says.

“We started the project right at the beginning of the spring semester, and we were still majorly rushing during the last week of school,” says another Ceramics II student, Enya Nett ’16 of Sun Prairie, Wisconsin. Nett assisted with creating the wings, as well as other sections of the piece. “I also created a large number of the background tiles, and I glazed and organized all of the feathers with the class’s names for the backsplash.”

Despite all the rush and frustration, Nett says, “It was a really great experience. We got to try out a lot of different techniques and experiment to figure out what worked.”

After all the slabs were broken into tiles, students assembled the tiles like a puzzle on a sheet fabric mesh so that maintenance workers could grout the tiles into place over the summer of 2014. Camper Sanborn ’15 of Mayville, Wisconsin, interned during the summer and assisted in the assembly of the sink.

Oblinger says she likely will do another project with Ceramics II students in the spring semester of 2016, although probably not another sink. “A few faculty members have approached me with collaborative ideas, but we are still working out the details,” she says. 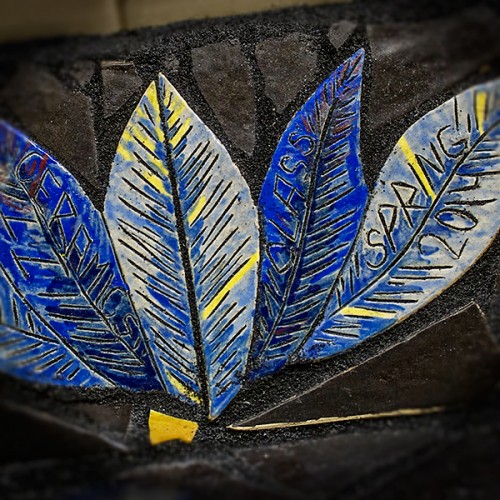