“To The Best of Our Knowledge,” an award-winning weekly Wisconsin Public Radio program, has as its technical director Caryl Wheeler Owen ’75 of Verona, Wisconsin. The show, which has been produced for 25 years, is the winner of the 64th annual Peabody Award for radio programming in 2005 and can be heard on more than 200 stations nationwide.

Owen has many responsibilities for the show, including setting up and recording in-studio and long-distance interviews, adding the “polish” to the show to make it sound finished, adding in music and sound effects, and putting the audio together for distribution. She uses her audio prowess to make all the sounds blend together into the final product.

“As the ‘ears’ of the show, I try to make sure that what you hear sounds so seamless and transparent that you’d never know that it took a lot of work to get it that way,” Owen says.

Owen first developed her love of sound engineering in high school in New York state. She played bass for her high school band but found herself more infatuated with the soundboard than the stage lights. She worked many shifts at Ripon College’s WRPN radio, which fueled her interest.

“I continued to play and sing in bands while at Ripon and later at Ithaca College, and eventually realized that recording console was really my instrument,” Owen says.

After college, Owen took a short course at a small recording studio. Eventually she found herself teaching there, only a month ahead of the curriculum than her students. “It was a good way to learn to think on your feet,” Owen says. After classes, she and her students experimented in the studio, always trying to use the machinery in exciting new ways.

Next, Owen interned for a larger, nicer studio and within a few weeks was hired. There she worked with many clients, such as Al DiMeola, Peter Frampton, Ian Hunter, and Leslie West and Corky Laing. In Woodstock, New York, she worked for Bearsville Studios with King Crimson and the dBs. But eventually the 120-hour a week workload became overbearing, and in 1985 Owen took an engineering position with National Public Radio in Washington, D.C. She was technical director for “Performance Today” and “All Things Considered.”

In 1990, Owen moved to NPR’s New York City bureau and worked often at the Brooklyn Academy of Music, including the recording of the world premiere of Philip Glass’s Second Symphony. While in New York, she also worked with “Story Corps” creator David Isay. Owen worked with Isay for many years and was considered part of the “Story Corps Brain Trust.”

Owen composed some of her favorite pieces with Isay, which can be heard on his website. Isay Story Corps earned three Peabody Awards while she worked there. “I have four Peabody Awards on my ‘wall of fame,’ three of them with David Isay and one with ‘To the Best of Our Knowledge,’ ” Owen says. “It pays to work with the best in the business!”

In 2001, Owen was recruited by Wisconsin Public Radio, and she and her husband moved to Madison, Wisconsin. She recorded classical and folk music and did live broadcasts for WPR and became technical director for “To the Best of Our Knowledge” in 2004. Podcasts can be found here.

She has worked both in front of and behind the microphone but prefers working behind the scenes. “I like finding the right voice for the material, and sometimes I’m that voice,” she says. “It’s really about what the material demands, and I still prefer backstage to onstage.”

Her favorite part of her job is the people she gets to be around every day. “Working on TTBOOK is like a graduate seminar on any and every conceivable subject,” she says. “I work with very smart, talented, thoughtful, creative people every day. I sit in on the best conversations, and get to play with sound and music and read books for a living! What’s not to love?” 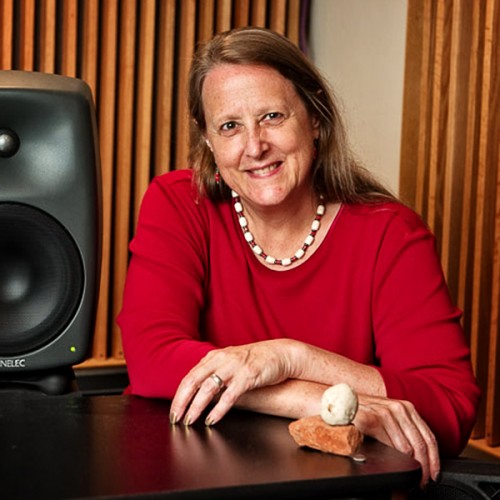