“My favorite part of my school job is watching my students’ faces when something clicks for them and they see the big picture, or they get an insight from history that connects with their own world or lives,” Sikkink Lee says.

She also worked for 13 years in the school’s boarding program, but this year she has traded caring for dorms full of teenagers to caring for a farm full of animals and crops. Sikkink Lee’s husband, Daniel Lee, had always wanted a farm, and Sikkink Lee’s parents had owned one when she was ages 8 to 23.

In 2013, their youngest child graduated from high school, and the couple purchased a house with 100 acres of land. Tenant farmers still were working the land that summer, but by their second summer they have plenty going on. The farm boasts five dairy cows, 18 steers for beef, 20 pigs, 80 ducks and about 165 chickens along with two Maremmas, an Italian breed of guard dog.

Sikkink Lee is the head of gardening on the farm, but is also able to run the farm by herself for several days when her husband is away. Sikkink Lee says she loves harvesting her own foods and making her own cheese and raising her own meat.

She enjoys working with the animals on the farm and cares for the smaller animals. “I also love doing the daily animal care because I get to interact with the animals and see what’s changing for them, or see how I’ve nurtured them,” Sikkink Lee says. “We have sociable animals, and many of them like interactions, especially the pigs, cows and dogs. Some of our pigs roll over just like dogs when you scratch them!”

Her profession of teaching has helped prepare her for work on the farm, she says. Supervising the dorms especially taught her how to deal with surprising situations and how to stick out long hours of work. “Although,” she says, “teenagers escape their boundaries less and talk back more than animals.”

Farming has also changed Sikkink Lee in several ways. It taught her a lot about the flora and fauna of Oregon, which are quite different from those in the Midwest. She also has learned how to persevere through hard days with little sleep and push to get things done. Many of their belongings still are locked up in storage, and Sikkink Lee is shocked at how little she missed most of her things.

Farming also has made her more comfortable with messes and looking messy. “I don’t care anymore about how I look unless I’m going to work or out for an evening,” she says. “And in a farm town, nobody looks twice if you show up at the grocery store in stained overalls and muddy boots!”

Farming also has changed Sikkink Lee’s perspectives on a few other things. “I’m fascinated that the farmer in me is becoming anti-government-regulation, as we run across a lot of silly rules and overly complicated procedures trying to farm the way we want,” she says. “I’m still pretty left-wing in my beliefs and politics, but I’m fascinated by and happy about the friendships I’ve made with people who care as much about food access and food quality and farming as we do, but come at their concerns from quite different social, political and religious perspectives.”

Farming is hard work, “but there are many parts that feel so positive that the work is pleasant,” Sikkink Lee says. “I love waking up on the farm, even to rooster crows, and not feeling rushed, but having time to do chores slowly and look around me at the beautiful hills, trees and pastures. I like picking fruit and making things like jams and syrups with it. I like working at the farmers’ market and having people appreciate what we’re providing. I love filling the water tanks for the cows in the late evening, petting them and looking at the stars.” 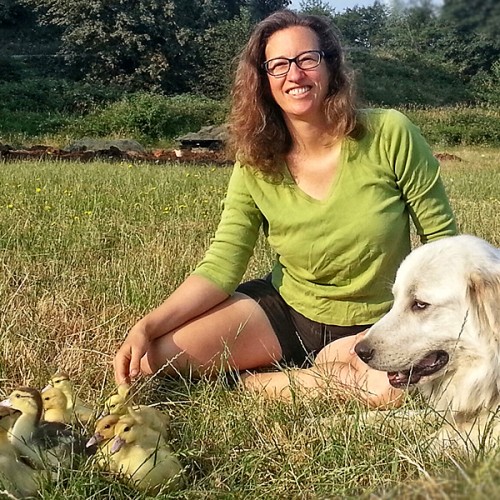