For Brandi Gaspard Mans ’10, the costume makes the character

A serendipitous disappointment at Ripon College led to a career choice for Brandi Gaspard Mans ’10 of Minneapolis, Minnesota.

Mans got into theatre in high school in Anoka, Minnesota, because some of her friends were doing it. “The theatre bug bit me,” she says, and she received a theatre scholarship to attend Ripon College. However, she intended to have only a minor in theater at Ripon. She enjoyed the theatre department so much and got so many credits that “I accidentally ended up with a major,” she says. “Through my experiences at Ripon, I got into the backstage sort of stuff — again, because I had friends doing it and they needed help.”

During the first semester of her senior year, Mans took the costume design class and found that she really liked this aspect of theatre. “I found I had a knack for sewing, and I like to do it,” she says. “I spent hours and hours in the basement of Rodman.”

For the second-semester play, Mans tried out for an acting position but was not assigned a role. Instead, costume designer and shop supervisor Susan McDaniel Hill offered her the chance to use her new design and sewing skills as the assistant designer for the show.

She had found her theatre niche. “From there, I decided that costuming was really where I wanted to go,” she says. “It solidified my career path, which was a really nice capstone experience. Costuming is a way to be involved with theater that’s not necessarily acting. I don’t have the type of personality to be an actor. With acting, you have to be really tenacious and be OK with a lot of rejection. Even though I like acting a lot, the technical aspects of theatre are a little easier to make a career of. I find it enjoyable to be able to design something and bring that to life. With costumes, it’s really neat to go from an idea in my head to having the costume going onstage for everyone to see.”

After graduation from Ripon, Mans worked for David’s Bridal in Brookfield and gained an in-depth knowledge of alterations. Most recently, she has been working as a free-lance costume designer in Minneapolis, including Theater In the Round Players, the oldest continuously running theater in Minneapolis, and her alma mater, Anoka High School.

“It’s cool to go back there and show the students that you can keep your theater interest going after high school,” she says.

This fall, she is starting on her master of fine arts degree in costume design at the University of Minnesota, with a full scholarship as a student assistant. “Costumes are kind of the visual representation of the character in a play,” Mans says. “What the person is wearing will tell you who they are, if the costumer has done their job right. It contributes to character development.

“At Ripon, you get exposed to every aspect of theatre and have a well-rounded view. You are able to communicate with other designers on a show. I think if I had gone to a larger school, I wouldn’t have had the chance to get into the world of costuming and discover that I really loved it.” 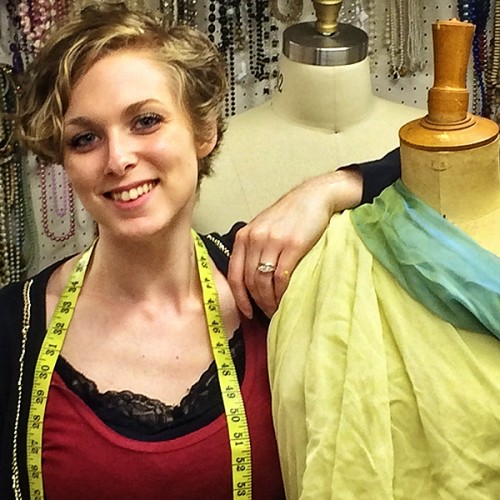