Ripon College has won its fourth straight regional championship at the Upper Midwest Regional Ethics Bowl over the weekend at Northern Illinois University. Ripon once again has secured a spot in the National Intercollegiate Ethics Bowl to be held in February 2016 in Washington, D.C.

The first round saw teams discuss the ethics of the law officer’s bill of rights (LEOBOR) and the fate of historical artifacts (who rightfully owns cultural items). In the second round, teams discussed the selling of cultural items when ISIS loots/steals them and if others should buy them; as well as #gamergate and the racism/sexism in the gaming world.

In the third round, students argued the ethics of the Indian Child Welfare Act of 1978 as well as the Anti-Vax Tax (legislation that would tax those who choose not to vaccinate their children). The final round addressed the ethics behind the Charlie Hebdo case (free speech vs. hate speech) as well as the intricacies of religious freedoms vs. equality as evidenced in the Supreme Court case Obergefell v. Hodges. 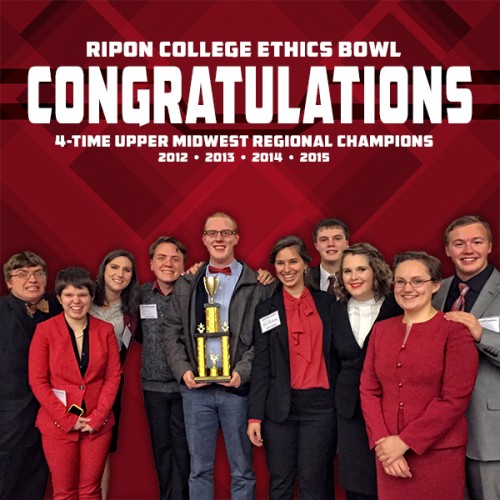