¡Buenas dias! As you know, several Ripon College students were very busy taking on the country of Costa Rica during winter break. Part three of the Costa Rica Field Studies blog will take you to the Monteverde region. This area is located at a higher elevation creating a cooler, drier and windier climate than the other regions we visited. We explored this area from Jan. 8 to 11. We stayed at two different sites for two nights each: UGA (University of Georgia Costa Rica) and La Calandria.

At UGA, we had a variety of experiences. We visited Finca La Bella, part of which is an organic coffee farm. The owner of the farm, Gilberth, guided us through the steps of coffee growing and processing. We learned that, contrary to popular belief, darker roasted coffee actually contains less caffeine then the lighter blend. This is crucial information for a college student studying for finals. During the tour, we stopped and pressed sugar cane juice, another crop that he grows on his property.

On our way back to UGA that night, we were challenged in a game of futbol by a few local boys. Unfortunately for our team, the boys quickly found the weak links (us) and won 3-2. Despite the loss, the game was a lot of fun for both sides.

Our last morning at UGA was packed full of exciting activities. One of them was cow milking. Being born in the dairy state of Wisconsin, we never thought we would have to travel to Costa Rica to hand-milk a cow. After everyone got a chance, we learned that the milk we got would be filtered and later used for creamer, cheese and hot chocolate. After cow milking, we left UGA for La Calandria.

Within the Monteverde region is the Santa Elena Cloud Forest Reserve. We hiked around the park for around three hours on the Youth Challenge trail. One of the highlights was climbing on a tall lookout tower to see a great view of Volcan Arenal! The cloud forest is one of the most biodiverse forests in the world, holding almost half of all of the species of Costa Rican birds. Some of the birds we saw included the silver-throated tanager, spangled-cheeked tanager and gray-breasted wren.

Stay tuned for more updates as we reach the final stretch of our trip in Costa Rica!

(Photo: Arenal Volcano viewed from the Santa Elena Cloud Forest Reserve. This was an unusually clear day in the cloud forest.) 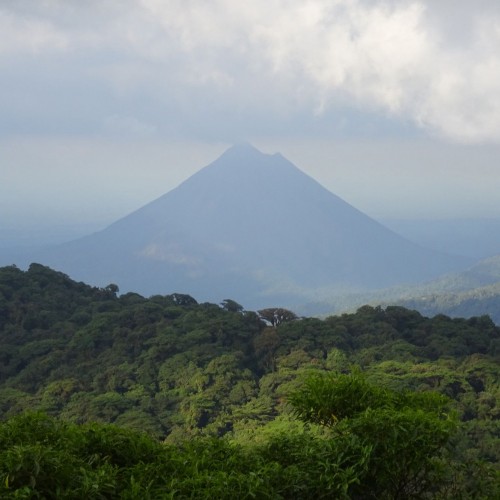