For Black History Month, Ripon College looks at some of its early black students

In 2000, the Winter edition of Ripon Magazine included a feature about who were believed to be the first African-American students to ever attend the College, three incoming freshman men in 1948. Delroy Cornick, Bill Stewart and Bob Walker faced some adversity and found some acceptance at Ripon, and all graduated in 1952. The graduation of these men was a testament to the way the liberal arts and sciences can bring together diverse groups of people.

Now, more than 15 years later, we were alerted via social media that this feature excluded even earlier known African-American students. Juan Daniel Vergara of Reynoldsburg, Ohio, bought a copy of the 1914 Ripon College Crimson yearbook at a vintage shop in Columbus, Ohio, and posted a track photo via Twitter including an African-American man identified only as “Young.”

“I started to dig into facts not only about Young but other gifted students [at Ripon College] — some who have written books and went into politics,” says Vergara. “So then I reached out to you guys because I found it special to see a black man in your yearbook in the very early 1900s.”

In earlier editions of the College’s student manual, the names of each student were printed. The 1912 student manual lists the full name of this student, George Reed Young. Little else could be found of Young except for a second picture of him on the 1912 cross country team. We were unable to find any record of Young’s graduation.

Andrew Prellwitz, associate librarian-User Services; adjunct instructor of German; and chair of the library, found evidence of another early African-American student, found in a student letter kept in the archives.

In a letter to her parents, Pearl Pierce Dopp ’25 recounted taking an African-American student, whom she names as Robert Page Sims, to the fall “walk-around,” a beginning-of-the-year dance where students could meet the faculty of Ripon. In a letter dated Sept. 27, 1924, she wrote:

“Yes, I went to the walk-around, and you would undoubtedly be shocked to learn that I took for my partner Robert Page Sims, a Negro from West Virginia. He is a freshman here, and there isn’t one white man in a hundred who has as much culture and gentlemanliness as he. I saw him on the campus and realizing that he would undoubtedly not get a chance to go to the walk-around, I conceived the idea of asking him.

“First I went to Don to ask his advice. He said he had been talking with Mr. Sims and believed him to be splendid, adding that it would be fine of me to take him. He asked him for me and came with him to call for me last night. (Don took Justine.) Well, we went and everyone treated him very nicely. He is very retiring, but an especially interesting conversationalist. I have heard that his father is president of a southern Negro college, but he didn’t tell me. I can tell that he has had a refined environment. I am sure I lost nothing by taking him and it was an extremely interesting experience. Prexy told Miriam that there were only two or three other girls in college who could have gotten away with it. He and others seemed much pleased.”

On the College timeline is this entry from 1887: “From the College Days, vol. VII no. 1, October 1887, under Local, p. 13, upper right-hand corner, 2nd column: “Ripon College has a young colored student from the northwestern part of the state. He is a bright, wide-awake fellow, and to the credit of the boys may it be said, he is well-received and joins in base ball (sic) and other games in full accord. [Ex.]”

Unfortunately, a definite identity cannot be given to this student. “We don’t have yearbooks before 1907, so it would not be possible to definitely identify the African-American student from 1887,” Prellwitz explains. “That said, looking at where the students were from in 1887, there is one student in the English Academy from Hayward, a town in northwest Wisconsin. His name is Albert William Safford.” 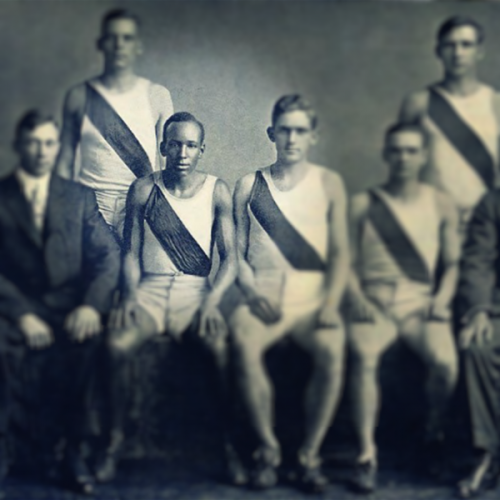