“Working in sports was always something that interested me growing up,” says Charlie Saponara ’94 of Visalia, California. “I’ve been a baseball fan for as long as I can remember and I played the game from Little League through college, so the idea of turning that passion into a career was always prevalent for me.”

Saponara, who majored in English at Ripon College, recently was promoted to assistant general manager for the Visalia Rawhide minor league baseball team, a class A affiliate of the Arizona Diamondbacks.

Saponara got professional experience while still a student at Ripon. During the summer before his senior year, he secured an internship with the Rancho Cucamonga Quakes minor league baseball team; and the year after graduation, he was immediately employed as a member of its front office team.

“Working for a professional baseball team seems like a glamourous job, and in that regard the profession is one of the most greatly misunderstood in the eyes of the general public,” Saponara says. “During the season, 10-15 hour days become the norm. That being said, if one is willing to put in the hours and hard work — and for not a lot of pay — the reward of being part of the professional baseball community is priceless. In other words, you have to truly love this industry to thrive in it long-term.”

For Saponara, the best part of working for a minor league baseball team is being able to work on a variety of aspects of the business. During the off-season, he works on many projects, everything from group sales and season ticket renewals, marketing and sponsorship proposals and contracts, and in-season promotional events. He says staying positive through the stress shows his true appreciation and love for baseball.

The experiences he had at Ripon College still influence him, Saponara says. One particular teacher stands out for him: his baseball coach, Gordie Gillespie. Gillespie often told the team that one day, one way or another, they were all going to be coaches. This statement stuck with Saponara.

“Some of my teammates did actually go on to coach sports as their profession or as part of their profession,” he says. “In my case, I went on to become a manager in a business environment. Part of my responsibility is to train and coach those working for me so that they have the skills to succeed in the present as well down the road as they work their way into a managerial role, or even ascend to my position as I continue my progression in this industry.” 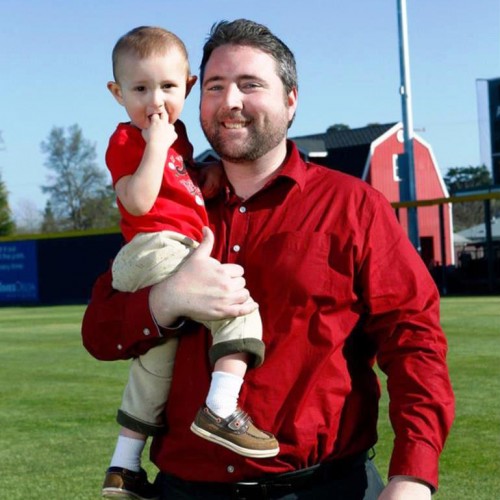