“I attribute much of my success to the liberal arts education I received at Ripon,” says Richard Russo ’76 of East Grand Rapids, Michigan, a member of the Ripon College Alumni Board of Directors. Russo and his wife, Kathy, (who did not attend Ripon), have been giving back to the College for more than 30 years.

“I did not know how critical my education at Ripon was until I attended graduate school at George Washington University,” Russo says. “I found the skills I obtained at Ripon helped to set me apart from other students. With a liberal arts education, I took courses across a broad spectrum of subjects, which gave me a well-balanced background in several fields of study.”

The Russos wanted young adults to be able to receive the same type education he did at Ripon, and they are aware of how difficult it is for young people to afford college. “As student numbers have declined over the past several years, a strong endowment and, specifically, more scholarships, have become critical to attract more students by reducing their out-of-pocket cost,” Russo says. “We wanted to give back to the institution that gave me a step up in my life in general and help me to become more successful as a person.”

The Richard K. 1976 and Kathy Russo Family Endowed Scholarship has no requirements based on the student’s major or background, but the Russos hope the scholarship helps certain kinds of students. “We want a student who shows lots of potential academically and has been willing to give back to society in general,” Russo says.

The first recipient of the endowment, Brian Wilson ’18 of Campbellsport, Wisconsin, fits that description. Wilson, though undeclared at the moment, believes he would like to major in psychology. He then would like to attend graduate school and become a clinical psychologist, or get into law enforcement, which offers myriad options in itself.

Wilson loves attending Ripon for the professors, small class size and sense of community among students. “The moment I first walked on this campus, I knew it was the best campus for me,” Wilson says.

The Russos aim to lower student debt and thus make attending college a less stressful experience. Wilson says the endowment is doing just that for him. “It’s a tremendous help,” he says. “We all know Ripon is not the cheapest school. But others are helping me, and it makes the tuition easier.”

He addressed the Russos directly: “Thank you for this scholarship. It’s a huge help for my financial situation. Ripon is the school I want to be at.” 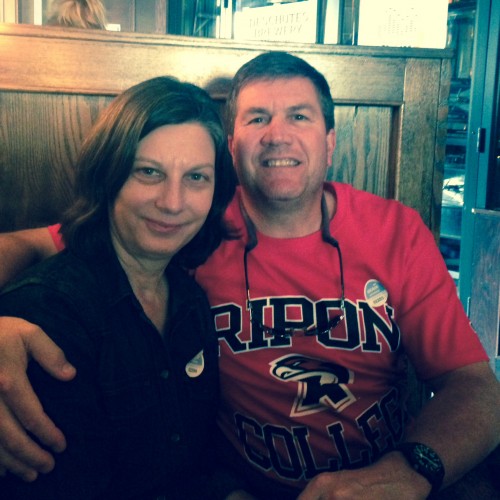