The Rev. Jerry Thompson, a former professor of religion and chaplain of Ripon College, and three former Ripon College students were among those recently awarded a collective Congressional Gold Medal — the nation’s highest civilian award, along with the Presidential Medal of Freedom — in recognition of their participation in the Selma-to-Montgomery Voting Rights March in the spring of 1965.

Thompson, who died in 2010, was chaplain of the College at the time and led a student delegation comprising Noel Carota ’67, Richard M. Grimsrud ’65 and Gary G. Yerkey ’66 to Selma to take part in the march, led by Dr. Martin Luther King Jr.

The award commemorated the 50th anniversary of the marches and “the Foot Soldiers who participated in Bloody Sunday, Turnaround Tuesday, or the final Selma to Montgomery Voting Rights March in March of 1965, which served as a catalyst for the Voting Rights Act of 1965.”

The medal will be given to the Selma Interpretative Center in Selma, Alabama.

House Speaker Paul Ryan (R-Wis.), in a ceremony at the U.S. Capitol in Washington, D.C., said that Congress decided to bestow the award on the so-called “foot soldiers” because their “contribution to our country was so great that they deserved the highest honor in our possession, the Congressional Gold Medal.”

Accepting the award on behalf of the 3,000 or so “foot soldiers” who participated in the march were Rep. John Lewis (D-Ga.) and the Rev. F.D. Reese — two icons of the civil rights movement.

Public pressure created by the march led to congressional passage of the landmark Voting Rights Act of 1965, which was signed into law by President Lyndon B. Johnson in August of that year.

Legislation signed into law by President Obama last year (P.L. 114-5) authorized Congress to bestow the Congressional Gold Medal on those who participated in “Bloody Sunday, Turnaround Tuesday or the final Selma to Montgomery Voting Rights March during March of 1965, which served as a catalyst for the Voting Rights Act of 1965.”

Three attempts, in fact, were made to march from Selma to Montgomery, the state capital, in support of equal voting rights for African Americans.

The first attempt took place on March 7, 1965, and became known as “Bloody Sunday” after the marchers were attacked by law enforcement officers with billy clubs and tear gas. The second — on Tuesday of the following week — ended with the marchers turning around after crossing the Edmund Pettus Bridge in Selma.

On Monday, March 16, a special emergency meeting of the Ripon College Student Senate was held to decide if funds should be allocated to allow interested students and faculty to travel to Alabama to take part in another attempt to march alongside King.

The funds were approved, but the decision set off a series of protests and demonstrations on campus about using student funds for the trip.

About a dozen college representatives expressed interest in traveling to Alabama, but ultimately only four made the journey: Thompson, Grimsrud, Yerkey and Noel Carota.

The third march, in which the Ripon delegation participated, was successful, arriving at the state capitol in Montgomery after five days and 54 miles on March 21.

Several years ago, Yerkey wrote a book about the experience, South to Selma: ‘Outside Agitators’ and the Civil Rights March that Changed America, in which he quoted Rep. Lewis as telling him that the Selma-to-Montgomery march had a profound impact on the “psyche” of all Americans.

Lewis said that white students from the North who ventured south to lend their support to the cause had played a pivotal role in ensuring the march’s success. “It was like Gandhi’s march to the sea. It transformed American politics.” 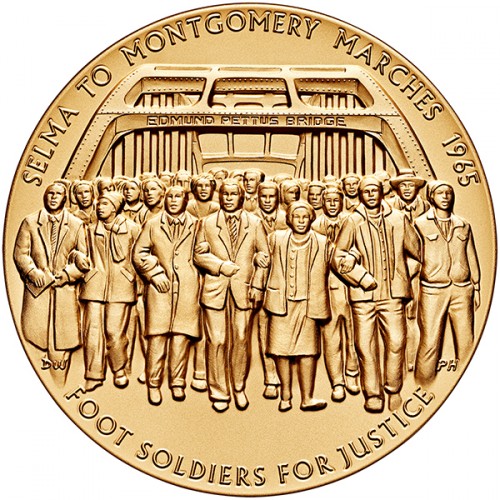