Student researcher studies development of bluebirds through their ‘droppings’

After falling in love with Ripon College because of its small class sizes, interpersonal relationships with professors, and numerous scholarship opportunities, Colleen Elzinga ’18 of Evergreen Park, Illinois, decided Ripon would be the perfect place to pursue her dream of becoming a veterinarian.

Elzinga, a chemistry-biology major and a member of the McNair Scholars Program, remained on campus this summer assisting Associate Professor of Biology and department chair Memuna Khan. Elzinga spent much of her summer researching the microbiomes found in blood and excrement of eastern bluebirds.

While the eastern bluebird may be a unique species in the world of veterinary medicine, Elzinga says, “I think this has been a good experience for me because it is a mixture of hands-on experience with animals, but it also has both the research and lab experience, too.

She found excrement samples can be more effective and consistent when examining androgen metabolite levels because hormones in blood can change because of stress or when numerous samples are not possible because of the small size of the bird. Then, the information taken regarding hormone levels in blood pertains to only one point in time.

She says excrement samples are easily obtainable, less harmful to the bird and may provide a better view of hormone levels over time.

In order to get the best excrement results, Elzinga follows a process of grinding, drying and purifying the samples before running them through an enzyme immunoassay testing kit to find the amounts of testosterone in each individual sample.

She says this is important because the androgen metabolite levels can show the development and growth of a bluebird based upon their process of releasing hormones, essentially telling the age of the bird.

“Knowing this, we can get more information about the growth and development of the eastern bluebird and pave the way for other researchers to conduct studies on their hormone levels and growth using our techniques and results,” Elzinga said.

Elzinga has presented her work to her professors and other research students, and also to those who attended the McNair Scholars conference in Milwaukee in July. She also will present at the National McNair Research Conference and Graduate School Fair in October.

The face of the Class of 2025: Our new first-year students

The Ripon College community is growing. As of Aug. 27, we welcome a class of 250 first-year students and nine transfer students. This compares to […]

When Chase Polyak ’25 of Lombard, Illinois, starts at Ripon College as a freshman this fall, she brings with her some touching family connections. She […] 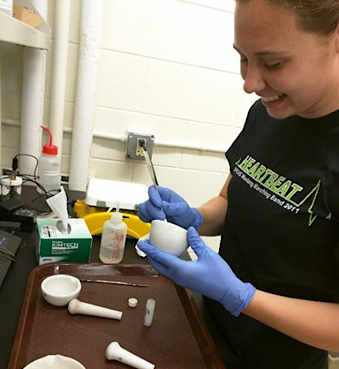