With future aspirations of working in pediatrics as an occupational therapist, senior Emily Coates of Schofield, Wisconsin, spent the summer with young children as part of a research project in the Infant and Young Child Cognition Lab. She studied aspects of the cognitive development of children under the guidance of Associate Professor of Psychology Kristine Kovack-Lesh.

A psychology major with a biology minor, Coates tracked the development of attention in young children from ages 2½ to 6, while utilizing three different tasks. The first task, Flanker, involves children looking at a line of fish and hitting the correct arrow keys on a computer to determine which way the middle fish was swimming.

Pop the Bubbles was conducted on a tablet and was adapted from an infant looking task to be more interactive. In this task, a dot appears either on the left, right, both sides of the tablet, or not at all. A bubble then appears with a sea animal inside of it or either congruent/ incongruent with the dot. The children must tap the tablet to pop the bubble.

The final task is a visual search task. The children are shown a shape and then it disappears and reappears on a grid with other shapes. The children find the original shape and touch it as fast as they can. The distractor shapes in the grid are either all the same or all different shapes.

The goal of this research is to examine how attention in young children develops over time. “For example, a younger child may not do as well as an older child on the Flanker task and instead hit arrow keys for the direction of the other fish are facing instead of specifically the middle fish,” Coates says. “We use the same tests for all ages, but how well the children do on the same test may be dependent on how old they are.”

Throughout the research process, Coates hoped to link her research with different research studies that have been done in the past on attention. This may give other researchers a better idea of how attention develops in children.

“We are not examining kids for where they ‘should be,’ ” she says. “The research we are doing may in the future be used to develop some sort of developmental scale to compare children to the average child of that age group’s attentional ability. However, it is important to keep in mind that children vary in how fast they develop.”

During her summer work, Coates also collaborated with Chelsea Grahn Andrews ’15. Andrews is in her second year in the developmental psychology Ph.D. program at the University of Wisconsin-Madison and is under the mentorship of Assistant Professor Vanessa Simmering.

Coates believes that working closely with young children has helped her to gain a further insight into their development, something she thinks will be useful in her future career path as an occupational therapist specializing in pediatrics.

From her work this summer, Coates was surprised how much of a difference one year in age can make in a child’s attention and their understanding of how they are supposed to perform the different tasks. The project will continue through the school year with various other students. When it comes time to analyze the results, Coates is hoping to see similar results between her observations and the statistics. 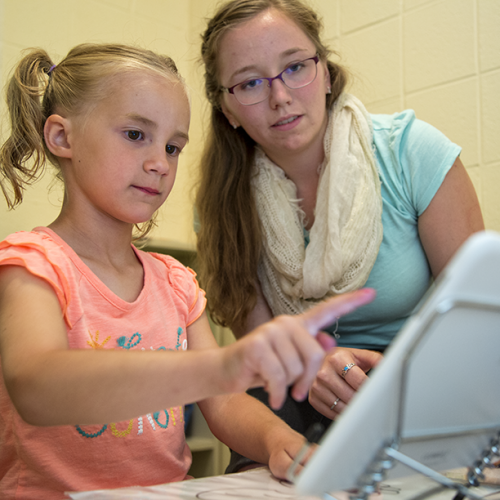