Michael Gableman ’16 and Mitchell Eithun ’17 attended at the annual Mathematical Association of America (MAA) MathFest in Columbus, Ohio, in August. Each presented research they have worked on, both receiving Pi Mu Epsilon awards for their efforts. The conference not only was a chance for the two to present their findings, but also for them to spend time together before Gableman moved on to his next school.

“I have known Mitchell since he started attending Ripon,” Gableman says. “We met at church during one of the first weeks of the semester.”

Eithun adds, “Michael and I had worked together in many classes at Ripon. We had a great time at MathFest seeing talks, meeting students and professors and gathering free merch in the exhibit hall.”

Eithun presented his findings from this summer, when he was part of an REU (Research Experience for Undergraduates) in mathematical biology at Texas A&M University. He spent eight weeks getting research experience and worked closely with Dr. Anne Shiu, assistant professor of mathematics at A&M.

“I worked closely with Dr. Anne Shiu on questions about chemical reaction networks,” he says. “My project was about phosphorylation, an important chemical mechanism in biology. I outlined the methods that I used to prove that a class of phosphorylation is ‘stable,’ meaning that chemical concentrations converge to one fixed concentration. It was difficult to narrow down which details I could share in a 15-minute talk. I had to think carefully about which details were interesting and important.”

Gableman presented research he did while attending Ripon with Visiting Professor of Mathematical Science Dr. Mark Krines. Gabelman explored Bertrand’s Ballot Theorem, a formula for predicting who would win an election.

“Originally, the theorem applied to only two candidate elections,” he says. We were able to expand it to three candidate elections. The greatest challenge was balancing technical information, background and content understandable by those with minimal knowledge of the problem. Having worked with the same material for several months, it was necessary to carefully choose what definitions were used. Many terms had become second nature to me but would have been unfamiliar to anyone who had not studied the problem.”

Gablemann now is a Ph.D. student at Purdue, studying computer engineering. After completing his degree, Gablemann will work for the Air Force Research Lab at Wright Patterson Air Force Base in Ohio. Eithun is considering a one-year mission program before attending graduate school or becoming a high school teacher. 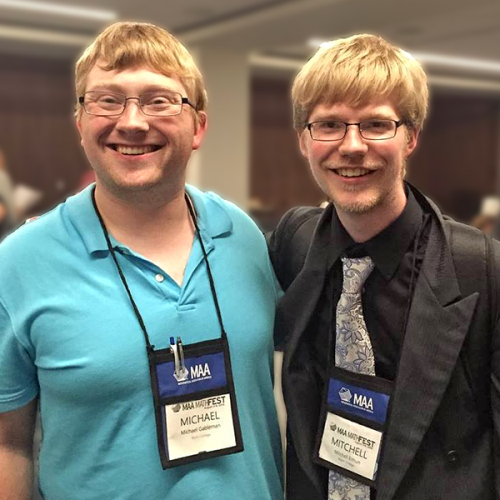