First-generation student discovers independence and the world at Ripon College

Jake Baus ’17 grew up on a small dairy farm near Mount Calvary, Wisconsin. As a first-generation college student, Baus was not entirely sure what the college experience would be like. In some ways, it was as he imagined. “It definitely met my expectations as far as social life and how tight knit the community is,” Baus says.

In other ways, Baus was surprised, but for the better. “I was surprised how much the professors cared about helping students and working with them to reach their goals,” he says. “My friends at larger universities couldn’t believe I actually had close relationships with my professors. I can literally find professors any time of the day in their given department.”

When Baus arrived at Ripon College as a freshman, adapting was a process. “It was hard,” he says. “I got here and my roommate and I didn’t get along at first. I went home every weekend until I got a friend group and things to do on campus,” he says. During this time, Baus’ family was always willing to let him drop out. “In a way, they were more scared than I was,” he says.

But Baus stayed and flourished. After taking an Intro to Biology class with Professor of Biology George “Skip” Wittler, Baus realized that he could have a future in the field. He is now a biology major, an engaged student-athlete, and a peer contact and tutor for incoming first-year students at Student Support Services. Has developed lifelong friendships at Ripon.

Being a first-generation student made college an adventure and a development of independence, Baus says. “You’re feeling it out, you get to figure things out by yourself. At first, it’s jarring. Everybody wants this sense of independence, but it’s a shock when you get it and have to figure out what it really means. It’s amazing to take hold of it and use it.”

With the assistance of Student Support Services, Baus secured an Undergraduate Research Fellowship in the summer of 2016 at Cincinnati Children’s Hospital Medical Center. He worked under a faculty member in the Molecular Cardiovascular Biology division and participated in sessions on scientific writing, ethics in research bioinfomatics and and end-of-summer research symposium.

“It was one of the best experiences of my life,” Baus says.

Baus will graduate in December and is excited for the future. “I’m looking forward to the adventure of graduate school,” he says. “It will be a whole new world, and I imagine I’ll feel like a freshman again.” 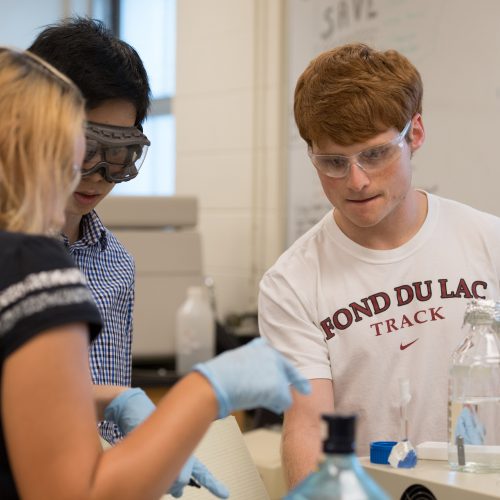