Whether it’s conducting meetings for German Club or mentoring at the CLC, Allwin and Seth McDonald ’17 from Milbank, South Dakota, embody the liberal arts spirit at Ripon College.

Allwin and Seth’s father, Brad McDonald ’88, is a graduate of Ripon College and recently came back to campus to present an alumni talk. In continuing this Ripon College legacy, both McDonald brothers have an avid passion for the sciences and for foreign languages. With interests ranging across a spectrum, their campus involvements also are very diverse.

As a double major in German and chemistry, Allwin McDonald came to Ripon College for the science programs and professors. “I chose to study chemistry because I love science,” he says. “Chemistry is also one of the most currently applied sciences in industry, so it is an in-demand field to be in.”

Allwin has been studying languages since he was young, starting out with Swedish. Upon coming to Ripon College, he decided to take a second major in German. “I love languages and traveling,” he says. “Also, understanding foreign languages is key to understanding their cultures.”

He spent the summer of 2015 from June to September in Vienna, Austria; and from September through July 2016 in Bonn, Germany. “I really enjoyed the opportunity to take classes in German, which greatly helped my understanding of German and my speaking abilities,” Allwin says. “I also cherish the connections I made while overseas and the experiences I now have.”

Allwin currently is working on his senior seminar research for chemistry which involves auxin, a plant hormone that impacts the agriculture sector. For his German seminar research, he investigated neutral countries’ involvement in World War II. He’s also the president of German Club, a member of Circle K, and worked in the chemistry stockroom, the CLC and as a lab teaching assistant. He plans to pursue his Ph.D. in chemistry at the University of Wisconsin-Madison, then use his doctorate degree to do research abroad in Europe or Asia.

Seth McDonald, much like his brother, says he chose to come to Ripon College for the professors and the science programs that are available. He is a double-major in biology and computer science with a minor in chemistry.

He also has been involved with Student Senate, Math Club and the forensics team, and has worked at the CLC and is currently a tutor. Although he is not majoring or minoring in a foreign language, Seth has taken French classes while at Ripon and has been studying Swedish outside of Ripon that led him to travel in Sweden for a summer.

“I would encourage everyone to try and spend time in a foreign culture,” he says. “It was pretty fantastic. I got to meet people from Sweden and all over the world.”

Allwin McDonald says there will be a lot to take away from their time at Ripon College. “What I will most definitely take away from Ripon with me is the friendships and relationships I have made with faculty here,” he says. “The professors at Ripon almost routinely bring imagination and fun into learning, and it is easy to be excited to learn when a professor is likewise excited to teach.” 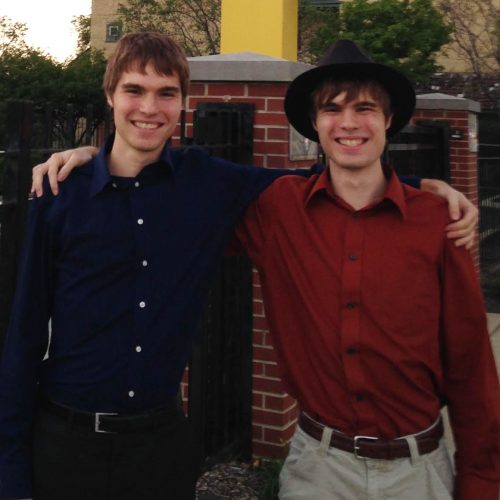