On a sunny Mother’s Day afternoon, Ripon College celebrated its 151st Commencement and the graduation of the Class of 2017. This year’s theme, Wisconsin Food and Entrepreneurship, honored the state’s commitment to food that contributes to its distinctive food culture and identity.

The two honorary degree recipients were Craig Culver, co-founder of the Culver’s restaurant chain; and Stefano Viglietti, a self-taught chef and entrepreneur with four food establishments in Sheboygan, Wisconsin.

Both at a brunch discussion earlier in the day and during the Commencement ceremony, Culver and Viglietti credited the lessons learned from others and from trial-and-error to the eventual success of their businesses and their personal lives.

“I was forced into the food business at the age of 11,” Culver said, when his parents bought a former A&W restaurant in Sauk City, Wisconsin. He, his brother and his sister all had to help out. “It was like a farm family — everybody works,” he said.

His parents later bought the Farm Kitchen resort at the entrance of Devil’s Lake State Park.

Culver thought the food business wasn’t what he wanted for himself. He graduated from the University of Wisconsin-Oshkosh in 1973 with a degree in biology. When his father suggested he take over the business, he at first said no. “He knew I had a passion for this,” Culver said. “I didn’t know. I didn’t know what my dream was. Fifty-plus years later, I’m still in the food service business.”

The business is best-known for ButterBurgers and frozen custard. It has expanded through franchises to more than 600 locations in 24 states, and Culver has played key roles in mentoring his franchisees and their team members.

Viglietti always had a passion for food, but instead of formal culinary instruction, he dove right in and became a self-taught chef. Although the learning curve was very steep at first, he said, he now owns
establishments that focus on authentic Italian cuisine, locally sourced meats, dairy and produce, and continuing education opportunities for his employees.

Viglietti visited Italy several times as a child and really loved the food. “And I’m a very sentient person,” he said. He said there is nothing like the feeling of coming home and smelling home cooking that someone has done for you. “That is one of the best acts of love you can do for someone,” he said.

When asked what comfort food was for each of them, Culver championed another of his restaurant’s staples. “It’s cheese curds!” he said. “C’mon, we’re in Wisconsin.”

They both like the state’s rich heritage of good food and like to use locally sourced products as much as possible. “Wisconsin is fourth in nation for land being organically tilled,” Viglietti said.

“We’re first in the nation for brandy!” Culver shot back. For three generations, Culver’s family members have all been involved in the food industry, and now Wisconsin products are shipped to all of the Culver’s franchises.

“Wisconsin is very, very important to us,” he said. “We export Wisconsin. When people see Wisconsin, they have great respect for that. They think quality.”

Culver, in his Commencement address, said he learned many lessons from his parents that helped make the Culver’s business the success that it is, and helped him to carry those lessons over into his personal life.

“My mother set the example of doing whatever it took to do things right,” he said. “She taught me to make the right choices, do the right thing. Let your heart make the decisions. In your heart, you always know what the right decision is.”

He said his mother also advocated being the right example to those around you, whether it’s in business or out in the community. “Invite the right people onto your team, surround (yourselves) with talented people and, more importantly, people with great hearts,” he said. “Positive people attract positive people.”

He advised the graduates to “continue to challenge yourselves. Never stop learning. When you overcome challenge, you not only become better at business but better as a person. Keep challenging yourself, keep learning and keep growing. As well, never give up on your core values.”

He said there is an expression in the food industry of “touching tables,” where employees go around to each table to check personally on how each customer is enjoying the food experience. He said this is a lesson to use in daily lives, as well, as you meet neighbors, friends and strangers out in the community. “I think it’s important to ‘touch tables’ with all people,” he said. “Don’t let your personal devices replace real face time. There’s nothing more important than looking someone in the eyes and really conversing. I call it hospitality. I want to continue to look our guests right in the eye and say, ‘How can I help you?’ That doesn’t come through a machine.”

Viglietti told the graduates, “I’m extremely excited about what you’re all going to do. I’m convinced the best leaders of this country come from institutions just like this.”

Legendary jazz singer Al Jarreau ’62, who died in February, was honored with the College’s Medal of Merit. Jarreau’s son, Ryan, accepted on his father’s behalf and commented on how much he has learned about Wisconsin and Ripon College, and why his father loved them so much. “This state and this university are contagious,” he said. “A lot of great minds and great hearts came out of here.”

Senior Class Speaker J.J. Grinde of Ripon, Wisconsin, also used advice of a parent to summarize his thoughts. His father has always told him, “It’s all about the little things,” and Grinde said he has come to realize the wisdom of this as he grows older. “We are the sum of the decisions we choose to make,” he said. “It’s up to us to have the integrity to hold ourselves accountable and do things right. It’s all about the little things. We aren’t done learning yet, and we never will be. I hope each and every one of you finds your little things.” 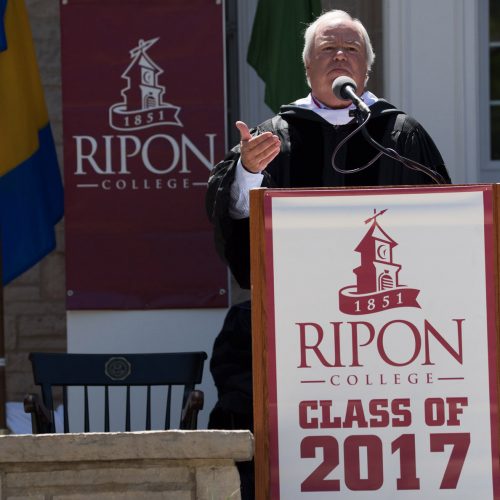