Since 2008, Associate Professor of Psychology Kristine Kovack-Lesh has been conducting research alongside students in her Infant Cognition Lab. Located in the basement of Todd Wehr Hall, the Infant Cognition Lab focuses on the mental development stages of infants and young children. Every year, students interested in psychology get involved by running tests and conducting research for Kovack-Lesh.

Kovack-Lesh says the lab is great tool for students to utilize. “It’s another way for me to teach them outside of the classroom,” she says. “We do a lot of studies in our classes but can’t do this much in a classroom. This gives them a way to gain experience.”

This summer, Becky Leuenberger ’19 and Diana Meredith ’19 have been working with Kovack-Lesh to research attention in preschoolers. The research is being done in collaboration with the University of Wisconsin-Madison and Chelsea Grahn Andrews ’14. Grahn is a Ph.D. student at Madison and also worked in Kovack-Lesh’s lab while attending Ripon.

Kovack-Lesh says the research is longitudinal, meaning it examines changes in the subjects over time. This specific project was started last year with infants, and the same children now are being examined one year later.

“We have the kids come in and play some games and see how long it takes them to complete the games,” Meredith says. “We are also taking kids we tested from last summer, so we get to compare how they did this summer to last summer.”

Kovack-Lesh acknowledges that most of the work this summer is being done by Leuenberger and Meredith. “Students are the ones who are collecting data and working with families,” she says. “They are running it.”

For Leuenberger and Meredith, their work this summer was a fantastic opportunity. “Working with Kovack-Lesh has given me the opportunity to learn from professors at UW-Madison about coding with eye-trackers, as well as with professors in Tennessee on coding a different task run in our lab,” Leuenberger says.

Leuenberger has plans to attend nursing school, and Meredith wants to get her master’s degree in clinical psychology. Both say the research they did this summer will help them toward their goals. 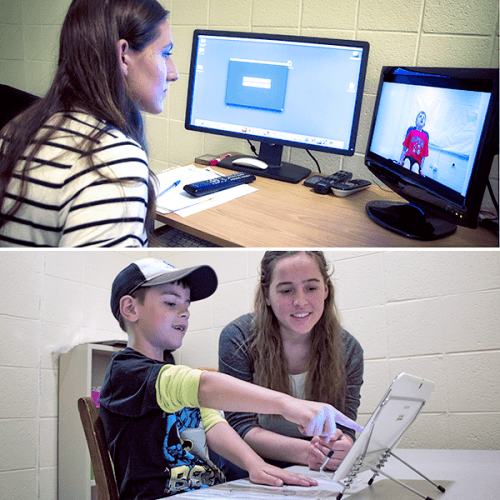