Prudentius, a fourth-century Spanish Christian poet who published his works in Latin was the subject of a summer research project by Mark Krause ’19 of Sun Prairie, Wisconsin. Krause, a history and self-designed classical studies major, worked alongside Professor of Classical Studies Eddie Lowry.

“Once considered a marginal author, Prudentius is now important in the scheme of Late Antiquity,” a period defined from the Roman emperor Marcus Aurelius through the rise of Islam to Charlemagne’s Holy Roman Empire,” Lowry says. “Writing for traditionally educated Romans, Prudentius identified Christian characteristics in well-known earlier Romans to promote the new religion at a time when the Roman emperor ordered the closing of pagan temples and prohibited pagan sacrifices.”

Krause’s main goal originally was to present research about Prudentius at the Wisconsin Association for Language Teaching conference in November. However, because very little research has been done on Prudentius’ works, despite his significance in history, Krause now plans to pursue this research further. He hopes to then be one of the few scholars published in this area of research.

“As far as the result of the research, this time period, known as Late Antiquity (200s-800s A.D.), is the new frontier for classics, early Christianity, medieval studies, religion and history,” Krause says. “Prudentius is just one piece of this criminally understudied area of history. I hope that in the future, work in this time period will dispel the incorrect notion that this is merely the Dark Ages, and also diversify studies in Latin literature, from graduate school programs all the way down to high school Latin instruction.”

Krause is actively preparing to attend graduate school, adding to his résumé with both his research on Prudentius and an internship at the Harvard Center for Hellenic Studies in Washington, D.C., also completed this summer.

“Professor Lowry has simply been a blessing,” Krause says. “He is one of Ripon’s brightest and best. He has done everything in his power to facilitate my learning and research, and I am proud not only to call him mentor but also friend.” 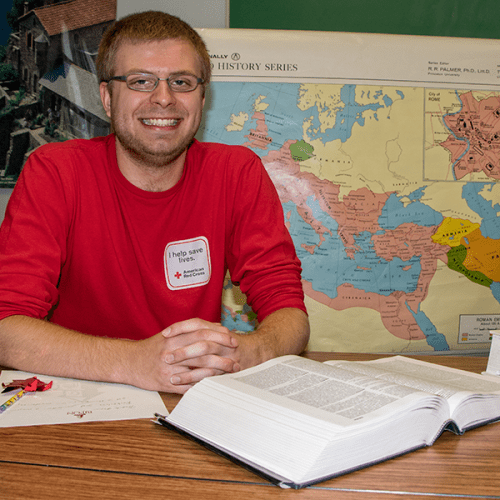