‘Three amigos’ keep friendship alive for more than 70 years, coming back for Homecoming

Bob Witt ’55, Ned Lufrano ’54 and Verne Churchill ’54 have never missed a Ripon Homecoming since graduation. These best friends have been coming home every year for more than 50 years.

Witt, Lufrano and Churchill all first met each other during high school in Chicago. Originally rivals on their school’s basketball team. Witt and Lufrano were best friends at Marshall High School. They met Churchill during a major basketball game against rival Foreman High School.

“Vernie and I played against each other in high school,” Witt says. “When I got to Ripon, we roomed together for three years. We became like brothers. I was in his wedding.”

While at Ripon, the three were inseparable. All were involved in ROTC and participated in Greek life. Lufrano chuckles about his first impression of one of his dear friends. “When I first came to Ripon, my parents drove me to North Hall. The first person I met was Verne. He came out and greeted me. He had a big hairdo at this time. It was called the DA. When he walked out of the room, my mother warned me and said I should stay away from him. We all lived together that freshman year.”

After graduation, Witt, Lufrano and Churchill all vowed to return to Ripon every year. Churchill adds, “There is a comfortableness when one goes back to Ripon and Green Lake. Especially with people you have had a long-term relationship with. We like going to a football game on Saturday, we have become creature of habits. You would think it would get boring, but it hasn’t.”

For these three men, Ripon means a great deal. He has “warm feelings for Ripon,” Witt says. “My two best friends in my life (I met here). Imagine keeping that up for 70 years. It’s been amazing when I tell people we talk to each other at least once a week,” he says.

Lufrano and Churchill will keep the tradition alive by attending Ripon’s Homecoming and Family Weekend this week. Witt, reluctantly, will miss this year because of a wedding he will be attending.

(Photo: Verne Churchill, left, Ned Lufrano and Bob Witt have another get-together before the World Series game with the Chicago Cubs last year.) 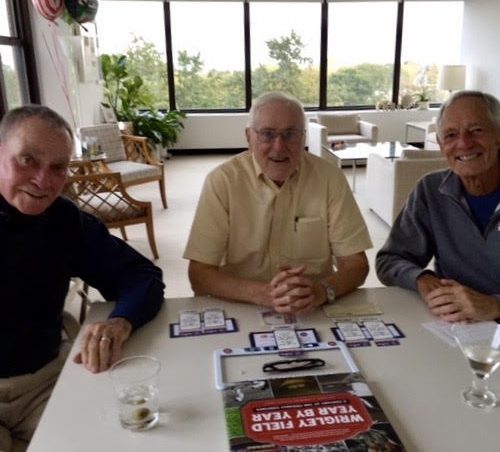