In the era of “fake news” and media distrust, seniors Alexa Beck of Elgin, Illinois, and Mollie Carlson of South Elgin, Illinois, chose to research the effects of media framing for their psychology senior seminar project. Attempting to prove that media frames affect our empathy toward a story’s subject, their research yielded significant results.

Both Carlson and Beck have been best friends since high school in Elgin, Illinois. They both are majoring in English and psychology, and that served as the inspiration for their project. “Framing in the Media: How Labeling Affects Perception” explores Erving Goffman’s 1974 theory of framing.

Carlson explains that Goffman’s theory argues that everything in our life is framed. “We took that and wanted to see if this would affect people’s opinions and how media would play on that,” she says.

Participants in the study read a scenario about a woman being robbed. One set of participants read about Kim Kardashian’s 2016 robbery in Paris. The other group read the same scenario but with pronouns instead of Kim Kardashian’s name. The stories then had positive or negative frame applied to them. Participants were asked, based on a scale, how much empathy they felt for the subject.

“We found a main effect of framing which is that they felt more empathy toward her when it was positively framed vs. when it was negatively framed;” Beck says. “We (also) found a main effect of identification, which just means that those who read the story when they knew it was Kim Kardashian had less empathy toward her then when they didn’t know.” Beck believes this could be a pre-existing bias toward Kim Kardashian.

Achieving significant results was an exciting moment for Beck and Carlson, who each did not expect the outcome. “Our results won’t make an impact, but it was cool to see that these theories that we were reading about are correct,” Carlson says.

Beck and Carlson still have another semester of psychology senior seminar left. They might continue their research this semester by looking into the effects of labeling.

Neither Carlson nor Beck plan to pursue a career in psychology, but they say that doesn’t change how they feel about their research. Knowing and understanding how framing works makes Beck and Carlson feel great, knowing their research has an impact on the real world. 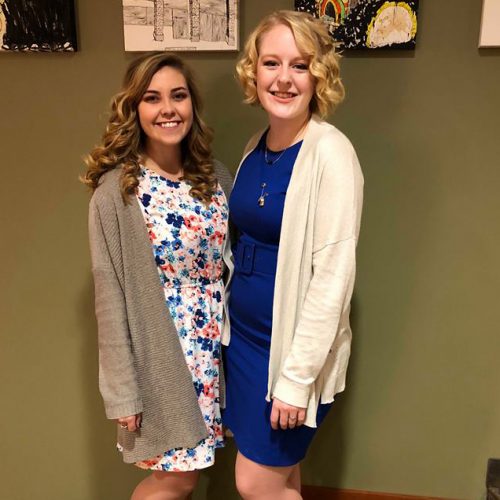