The collision of two dead stars may become one of the most important astrophysical events of the century, and a Ripon alumnus, Tyler Knowles ’13, is in on the investigation.

Last August, instruments of the Laser Interferometer Gravitational-Wave Observatory (LIGO) detected gravitational waves created by the collision of two neutron stars, the dense cores of dead stars. These are the first gravitational waves to be directly detected, although Einstein predicted their existence more than 100 years ago in his general theory of relativity.

This collision and the data collected by LIGO’s sensors have rocked the scientific community. Thousands of scientists are working to understand this event. Knowles is among the members of the LIGO Scientific Collaboration who have been hard at work examining this fascinating event.

“Gravitational wave detectors are basically science’s newest ‘telescopes,’” Knowles says. “Because of this, we cannot say definitively what it means for our understanding of the universe until we have more data. But we have already confirmed that elements heavier than iron can form in neutron star collisions, that neutron star collisions do indeed emit gamma-ray bursts, and we have new estimates on the rate at which the universe is expanding.”

After graduating from Ripon with majors in mathematics and physics and a minor in chemistry, Knowles developed an interest in relativity. “One of the first courses I took as a graduate student at the University of Alaska-Fairbanks was a special topics course on special and general relativity,” Knowles says. “As an undergraduate, I was a double-major in mathematics and physics, so a course on relativity taught by a mathematician was naturally appealing to me.

“As I explored other potential research topics in mathematical physics, my awe of the questions that remain about the universe as a whole — including those associated with dark energy, dark matter, and measuring the cosmological constant — brought me back to this professor who studied general relativity.”

At LIGO, Knowles refines tools the observatory uses to process important data, such as that collected by gravitational wave detectors. He, in collaboration with thousands of other scientists, is working to better understand the universe. A discovery like this one answers many important questions while creating more.

“The discovery of the first gravitational wave was no doubt an important milestone, which validated more than four decades of dedicated work by theorists, experimentalists and engineers,” Knowles says. “We saw the collision with visible light, gamma rays and gravitational waves — each method of observation tells its own story and gravitational wave astronomers couldn’t be happier to be contributing to mankind’s knowledge of the universe.” 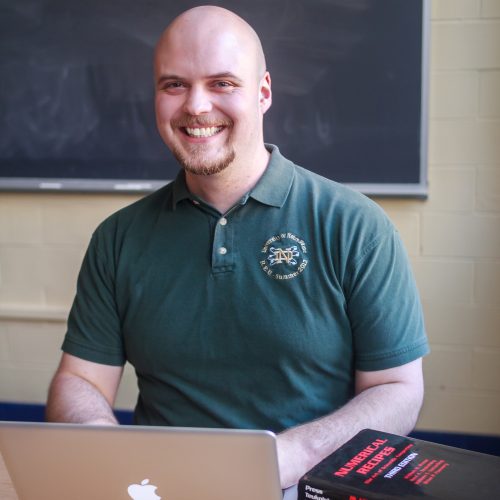