Honoring this nation’s veterans is a focused mission for Andrew Schaller ’10 of Neenah, Wisconsin. “In November 2015, I embarked on a journey to find out the history of military service for my family,” he says. “In my basement, I created our family Honor Wall to remember those who sacrificed a part (of) or their life for our freedom.”

The project soon grew beyond the walls of his home to become the Oshkosh High/West Veterans’ Honor Hall, an expansive memorial dedicated to Oshkosh-area veterans who have served or are currently serving in the United States military.

“The most rewarding experiences are the conversations I have with veterans and their families,” Schaller said. “We all too often think about the experiences and sacrifices the soldier makes, but we need to remember the families who also had to sacrifice a lot.”

At Oshkosh West, the names of more than 2,000 veterans are honored on two expansive walls. The project has a regularly updated website, representing virtually all who are honored. To date, the project has raised more than $11,300 to support continuous updates.

“As an Iraq veteran, I know the impact of how recognition and appreciation can impact another veteran,” Schaller says. “It was my time to step up and take care of others in our community and give them the recognition they so duly deserve.” 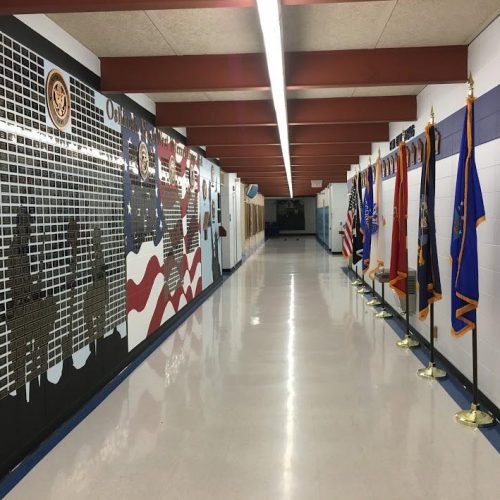