Ripon College’s annual student-directed One Act Play Festival runs Friday, April 13 and Saturday, April 14, with four performances starting at 7:30 p.m. in Benstead Theatre, C.J. Rodman Center for the Arts. The content is for mature audiences due to language.

Karma follows the story of Paul Redding, who finds himself in a purgatory DMV after he was hit by a texting co-ed driving a car. Paul ends up in a struggle fighting for his life, or his afterlife as the case may be. His former classmate, Chaz, just had a heart attack but figures he can bribe his way out of this, even if it means, to Paul’s horror, offering his wife Wendy up as a replacement.

Words, Words, Words is about three chimpanzees in a laboratory trying to write Shakespeare’s Hamlet. It goes with the old “infinite monkey theorem” that if you put a bunch of monkeys in a room with typewriters sooner or later they will write the works of Shakespeare. This play follows Swift, Milton, and Kafka — the three chimps — who question why they are really there by discussing and confronting the purpose of the experiment itself.

Mere Mortals starts with three construction workers eating lunch on the 50th floor of a skyscraper they are building. What starts out as a normal lunch steps away from the expected, as each worker’s secret past is revealed.

Plan B is about an unhappy couple ending up in the emergency room after an accident on their anniversary. While waiting to see a doctor, an eccentric woman arrives with a sauce pan stuck to her head. Is she a hindrance, or the help they need?

Members of the casts, include:

Members of the crew, include: 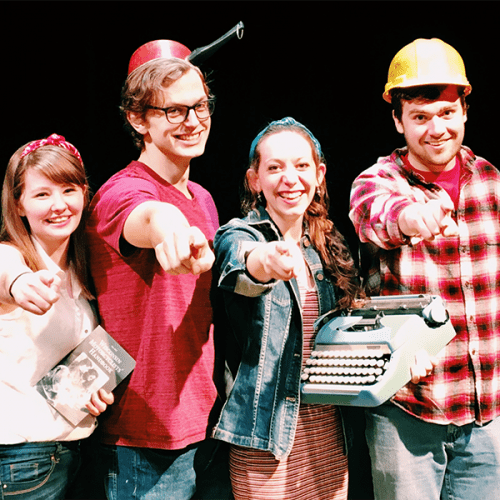