“The feeling of presenting my research in our great nation’s capital is an honor and an unforgettable experience,” said Willie Penterman ’18 of Kaukauna, Wisconsin.

Penterman, along with Lauren Hince ’18 of Blaine, Minnesota, and Rose Hogmire ’18 of Lake Elmo, Minnesota, attended the recent Pi Sigma Alpha National Student Research Conference. Pi Sigma Alpha is the honor society for political science students, and for students to present they had to first be recommended by the head of their PSA chapter, and then submit their research for review.

“Rose and I have been longtime Redditors and have noticed the increase in political awareness through the years,” Hince says. “When (then) President Obama hosted an AMA (ask me anything), he crashed the website. We wanted to try and quantify how important Reddit can be for political campaigns.”

Hince and Hogmire created a two-part survey, one part quantitative, the other with open-ended, qualitative questions, and sent the survey to redditors who had posted in Obama’s AMA. Hince and Hogmire also interviewed political candidates about their experience with Reddit. They spoke to a congressional candidate in Texas, as well as a member of Bernie Sander’s communication team.

“There is still a lot left to be determined,” Hince says. “I think it is too early to draw any major conclusions. Our aim was to illuminate what Reddit was capable of, and I think we were able to accomplish that with our research.”

Penterman presented “The Road to Energy Independence.” He researched historical and current attempts at energy independence and sustainability, and examined possible pathways for the future.

“I argue that the supply of cheap, abundant and sustainable electricity will motivate businesses and individual consumers to switch to electric-based products instead of petroleum-based ones,” he says. “I also argue the path to create cheap, clean and abundant electricity is through nuclear and solar power, which the federal government should incentivize through tax credits.”

The conference gave each presenter the opportunity to share their work with others in the political science field. “I enjoyed being able to talk to people about Reddit,” Hince says. “A lot of people approached us about the uniqueness of our topic.”

Penterman adds, “I had the opportunity to meet a number of great people from different places and discuss the state of our nation, current events, and our research findings. Whether they were Democrat or Republican, liberal or conservative, everyone contributed their ideas on how to make our country a better place.” 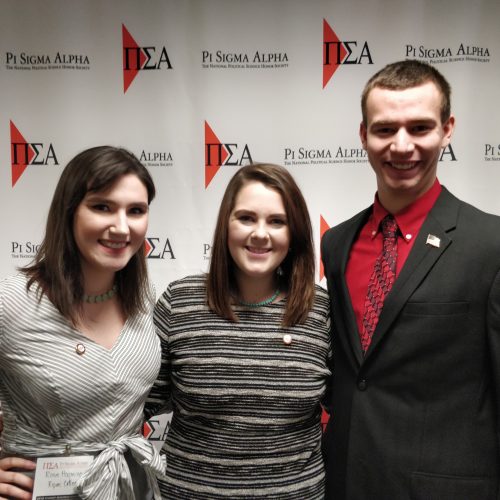