A 15-year project of passion to honor the military finally came to fruition May 1 for James Laufenburg ’79 of Arlington, Virginia. A 12-foot bronze sculpture commemorating the 3rd United States Infantry Regiment (The Old Guard) will be unveiled and dedicated today at the Old Guard Monument at Fort Myer, Virginia.

Laufenburg majored in anthropology and history at Ripon College. He served two tours of duty with The Old Guard from 2001-2003 and was called upon to react to the events of Sept. 11, 2001. As a member of The Old Guard, Laufenburg served as a member of the reaction force, leading cleanup and rescue efforts in the midst of the devastating event. He found himself deeply inspired by the efforts of his comrades, and he conceived of The Old Guard Monument in commemoration of all who have served in the United States’ oldest active Army unit.

Barbara Mungenast of St. Louis, Missouri, was commissioned to work on the sculpture. Laufenburg was introduced to her through a mutual friend. She “didn’t know much about the unit, and so she flew out and spent the day with us,” Laufenburg says. “She really liked the idea and agreed to do the sculpture.”

Laufenburg wanted the sculpture to represent the past, present and future of the Army. To the right, a colonial soldier is poised, playing the fife. The center features a modern soldier on guard at the Tomb of the Unknown Soldier. An infantry soldier crouches to the left, looking toward the distant horizon of the future and challenges he’ll be faced with next.

The project took many years to come to fruition, and Laufenburg faced many obstacles. Before the sculpture could be erected, it had to gain the approval of the Commissions of Fine Arts (CFA) through a formal presentation process. The CFA took eight years to approve The Old Guard Monument. Over the course of its development, 25 volunteers lent support, working for nothing more than the feeling of contributing to the commemorative sculpture.

“After I retired, the project kept me connected with the Army,” Laufenburg says. “That’s the most rewarding part — staying connected to the military.” 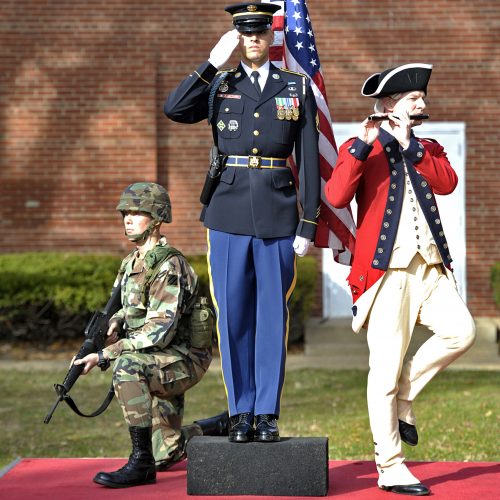