To his already busy schedule as a senior foreign relations staff officer at the National Security Agency, Rick Estberg ’75 of Severna Park, Maryland, incorporates theatre and public speaking into his life.

For the past 10 years, Estberg has acted in seven productions; for the past 12 years, he has been a member of Toastmasters, an organization dedicated to “providing a friendly, supportive environment for members to improve their public speaking skills.”

Estberg says he became involved in theatre “when two things coincided: both of my sons had become adults, which freed up a lot of time; and, I finally decided that I needed to find the guts to try out for something I had always wanted to do but (was) always too timid to pursue.”

Estberg’s latest role has been in “Lucky Stiff,” a musical farce based on the 1983 novel The Man Who Broke the Bank at Monte Carlo. In one disguise or another, Estberg plays a New Jersey tough guy, an Arab and an Italian tycoon, one of whom ends up being the “Stiff.” He says his involvement in the show has been one of the most fun and rewarding experiences he has had in theatre yet.

“I have to admit it: it’s hard not to derive a lot of enjoyment and psychic ‘payoff’ to hear a full house of 200 theatre patrons laughing boisterously at your humor (such as Luigi Gaudi dying a ridiculously hammed-up death in ‘Lucky Stiff’), or hearing a few sobs from the audience when your lovable character dies early of cancer (John in ‘Calendar Girls’),” Estberg says.

“Besides that, it’s always great to be part of a true team effort, where everyone from director to main character to seamstress to stage manager to set painter plays an integral part in putting on a high-quality show.”

In addition to theatre, Estberg also avidly participates in Toastmasters. With thousands of chapters around the world, many join Toastmasters to improve their fear of public speaking; Estberg is among the smaller minority who joined Toastmastrs because he already enjoyed public speaking and wanted to continue pursuing it.

Estberg is active in his local club, “serving in various positions, competing in contests and mentoring junior members.” He has won several competitions, including a recent district-level humorous speech contest whereat the best speakers representing more than 100 clubs competed, as well as one which took him to the level right below the international public speaking world championship.

Estberg is more satisfied, however, with helping the more timid members of his club. “(They) almost always find, over time, that their fears are unfounded and they really, truly can succeed — and they do,” he says. “It’s exciting to see self-confidence grow right in front of your eyes — and ears.”

Estberg majored in combined foreign language at Ripon College and received a master’s degree in international relations from Boston University. For the past 38 years, Estberg has considered his position at the National Security Agency his day job, and he juggles busy rehearsal schedules, public speaking, tutoring and coaching Little League baseball around it.

“While it’s true that theater does take up an awful lot of evenings — probably four per week over a period of two months — it’s still a fact that after the final performance of Lucky Stiff, I’’ll feel a tad bit bored and wonder what to do with all the new free time,” Estberg says. “I’m sure I’ll come up with something.

“Even taking into account some not-so-pleasant adventures of adulthood which don’t often get discussed, such as enduring a son’s extended addiction to drugs and a wife with numerous medical issues, I couldn’t be happier with the way it’s all turned out,” Estberg says. “I recognize how lucky I was to have the opportunity to spend four fantastic years at Ripon to help put me on a great road.” 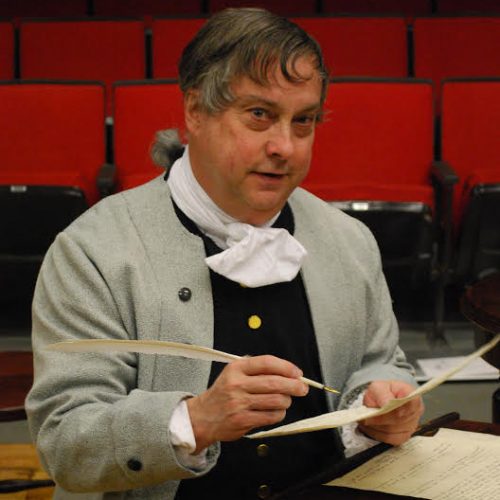