High school coach got his grounding at Ripon College

The atmosphere of Ripon College made the difference for Josh Heisler ’01 on choosing to attend as a student. “The main factor that set Ripon apart from others was the people,” he says. “I was so impressed with the students, professors and coaches. The atmosphere of the campus separated it from other schools I was considering.”

Heisler majored in physical education with a minor in health. He received a master’s degree in educational technology from Fielding Graduate University. He teaches and coaches football at Kimberly (Wisconsin) High School.

“The greatest lesson I learned during my time at Ripon was that no matter what field of work or path I chose, success was going to be determined by how you could relate to people,” Heisler says. “I had so many great influences at Ripon College that were demanding, but fair and compassionate. I learned these lessons from my coaches and professors. Coach Ron Ernst, Coach Rick Coles and Coach Marc Curcurio taught me many valuable life lessons outside of the classroom. I was also very lucky to have outstanding professors, including Chuck Larson, Elaine Coll and Julie Johnson, who had a major impact on my future as an educator. These individuals deserve so much credit for dedicating their lives to helping young adults.”

Heisler has been a varsity coach for 12 years. He spent many years as the defensive coordinator and now coaches linebackers. “I have been very fortunate to be a part of many successful teams,” he says. “I am involved in many facets of the athletic program, specifically strength and speed training year-round for athletes of all sports. This includes working with students ranging from 5th grade through high school seniors.”

He says the time he spent at Ripon prepared him to work with a wide variety of students and athletes. “These kids come from many diverse backgrounds and family situations,” he says. “Ripon College helped prepare me to treat these individuals with compassion and understanding while holding them accountable. I was lucky to learn from the example of so many great people during my time at Ripon.” 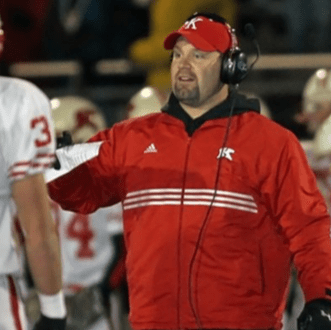