Jason Nuttall ’04 achieving his dream as an athletic trainer

A transfer to Ripon College to complete studies as an athletic trainer has fulfilled the career ambitions of Jason Nuttall ’04 of Mauston, Wisconsin. After majoring in exercise science with a minor in biology, Nuttall now is a licensed athletic trainer at Mile Bluff Medical Center in Mauston.

“My first year of college, I attended a University of Wisconsin two-year campus, and I knew I wanted to continue on and pursue a degree in athletic training,” Nuttall says. “When I was considering my options for transfer, I knew I wanted to stay close to my hometown (Portage), so I narrowed it down to UW-Madison and Ripon.

“I chose Ripon for a multitude of reasons, one being that I would actually be a person — not a number. I also liked the ability to get a well-rounded, liberal arts education while still getting a degree that was heavily science-based. I would also be remiss if I didn’t acknowledge that my older brother, Paul ’03, going to Ripon, was a draw, as well.”

Professionally, he says, he is doing what he wanted to do. He wanted to work in a high school setting to prevent, evaluate and rehabilitate high school student athletes’ injuries — “which is where I have been for the past 13 school years, the most recent 11 being in the same district.

“I have also learned that I love working with ‘older athletes’ as well, through instructing exercise classes for retired adults. My oldest athlete was more than 100 years old! Over the past few years, however, I also have been working with what I like to call ‘industrial athletes,’ or employees in industries ranging from manufacturing to hospital. This emerging area of athletic training, is something I feel Ripon College prepared me for — the ability to adapt and apply what I know to many different scenarios and to always be willing to learn new things.”

Nuttall says his areas of study at Ripon College prepared him well for working in the health care field. “In healthcare, not every patient fits the textbook mold of signs and symptoms, and my studies taught me how to think outside the box and look at things from a different angle to get the full picture.

“The most rewarding thing about my time at Ripon is the fact that it feels like home. Any time my wife, Katie Mead Nuttall ’11, and I are in the area, we like to stop in and reminisce about our times at Ripon College. Even though we were at Ripon at different times, we still have common memories that make us feel at home on campus and around town.” 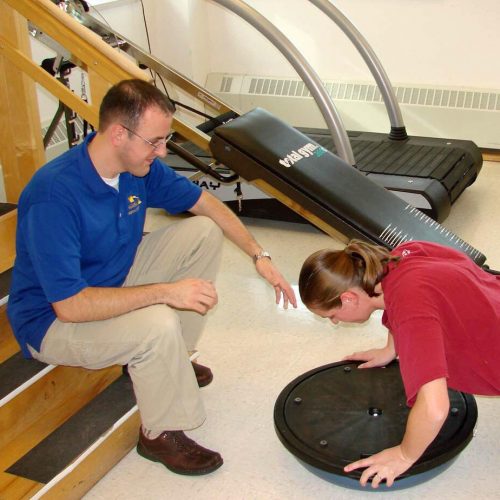