When the body of the late President George H.W. Bush was received at Joint Base Andrews earlier this week, helping to receive him was a former fishing buddy, Drew Davis ’07.

“His warmth, kindness, generosity, civility, service and grace must now live on through all of us,” Davis says.

Davis majored in religion and politics & government and minored in national security studies at Ripon College. He explains how this special friendship came about. Davis attended the Bush School of Government and Public Service at Texas A&M University from 2008 to 2010. He earned a master’s degree in international affairs with concentrations in national security law and intelligence.

The school is located on the grounds of the George H.W. Bush Presidential Library and Museum. Behind the library and school is a large pond, which is kept stocked with fish to accommodate the late President Bush’s love of bass fishing.

“Many mornings before class, and almost every Friday evening when the work was done, I would grab my fishing pole and tackle box from my office at the school and walk out back to the fishing pond,” Davis says. “Fridays were always serene: The library would close, the tourists would leave, and the sunset always felt fulfilling with another good week of experiential learning in the books.”

On one of those Fridays during his first semester, after Davis had cast a line into the water, he saw several men in black suits, sunglasses and ear pieces spreading out across the area around him. “I thought to myself, ‘Well, this was a short-lived career — I’m surely going to jail for fishing in the President’s pond, after hours no less.’ Much to my pleasant surprise, however, down the walk came President Bush. He was holding a walking stick in one hand and his fly rod in the other. Mrs. Bush was walking alongside him, holding a leash and walking their little dog.”

Bush started fishing nearby. “It was amazing to be fishing alongside the President,” Davis says. “He was a skilled angler, graceful with his movement and deliberate with his retrieve. I was taking notes. It made my semester to simply be in earshot of the man, our school’s namesake. Little did I know how much better it would get.”

The following Friday, when Davis went down to the pond to fish, he again saw Secret Service personnel blanketing the area. “Here came the President and Mrs. Bush,” Davis says. “He had his walking stick and fishing pole, and she had the dog. It was deja vu. The President slowly fished around the pond until he was quite near to me. I looked at one of the Secret Service agents, signaling my intent to approach our former President; the agent smiled and nodded approvingly in my direction.

“The President warmly greeted me and was delighted to learn I was one of his new students. We chatted for a while as we fished, and he said he looked forward to running into me again around the pond. It was the start of a friendship I would cherish for a lifetime. We fished together often throughout my two years at the Bush School, and my peers and professors were stunned, though hardly surprised, when President Bush came into the classroom to receive our practice briefings and greeted me by name. ‘Are we fishing again Friday, Drew?’ ‘Yes, sir, Mr. President.’ I, of course, felt like a god among men.”

After Davis graduated from the Bush School, he and Bush kept in touch as pen pals, exchanging letters and Christmas cards. They met a few times over the years in the Washington, D.C., area, as well. “It was always so wonderful to be in their presence and be reminded how a real gentleman scholar carries himself,” Davis says. “He and Barbara were the warmest, most generous, most in-love couple I’ve ever met. His class, kindness, civility, humility and sense of humor will forever remain an inspiration to me and my peers. He always told us, ‘Public service is a noble calling.’”

(Photo: Drew Davis, Class of 2007, was present to receive the body of former President George H.W. Bush at Joint Base Andrews.) 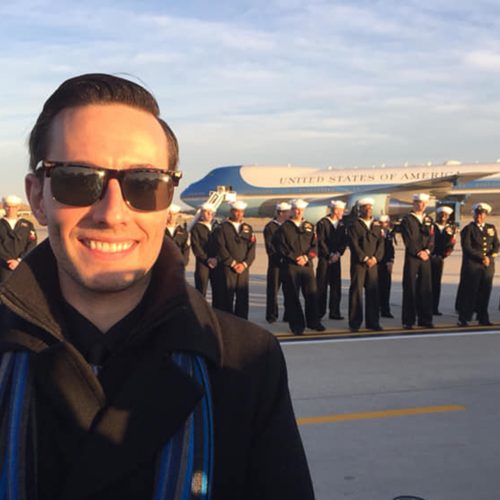