A lifelong love of animals and biology is now a budding research opportunity for Mica Rivera ’21 of River Falls, Wisconsin. For two semesters, the psychobiology major has been working with Assistant Professor of Psychology Julia Meyers-Manor to research cognitive behavior in mammals, rats in particular.

The rat lab opened in spring 2018 at Ripon College and includes a student group and research group. The lab supports the theory of ego-depletion, the idea that mental resources are depleted because of outside forces such as stress and work.

This is the first time many of the students working in the lab have handled live animals and charted experiences. As a lab assistant, Rivera sets up student labs, gets the rats used to being handled by humans and ensures the lab environment is completely hygienic.

“We were able to support the theory that when your mental resources are depleted, you do have more impulsivity,” Rivera says. “This past summer, we couldn’t prove the ego-depletion model again. We’re wondering if we’re doing too much handling of the rats, or if it’s the species. … That’s why we’re doing dogs this year.”

Rivera became involved with the project thanks to a simple conversation with Meyers-Manor. During class one day, Manor brought in her dog, Orion. Rivera asked whether she could bring her pet in the next day. She brought her gecko, an approved emotional support animal, into class. “It was our mutual love of animals that got it started,” Rivera says.

This semester, Rivera is examining ego-depletion in dogs. The research team will collect data, format it for a presentation and present the work at the Comparative Cognition Conference in Florida alongside graduate students. Rivera was the youngest presenter at this previous summer’s conference.

Conferences are the “place to learn as much as possible — you can learn from me, and I can learn from you, and I think that’s what brings science together,” Rivera says. “You always want to learn more. You’re passionate about research.”

Rivera distinctly remembers her first encounter with wildlife: at 2 years old, she and her twin sister were taking a bath when their father carried in a giant female black rat snake from outside. “I thought it was so cool,” she says. “My dad has always been big into animals as well, and so we’ve always pushed each other,” she says. “I always want to know what they’re thinking and why they are the way they are. What niche do they fill in society? It’s just always been animals!”

She says she plans to spend the rest of her life learning about animals. “To be given this opportunity to do this every single day and be with the rats — that in and of itself is really rewarding.”

Rivera appreciates being able to build and intensify relationships with professors like Meyers-Manor. “To people who are interested in research, talk to your professors!” she encourages. “There are opportunities out there, and professors love to help students build on their dreams.” 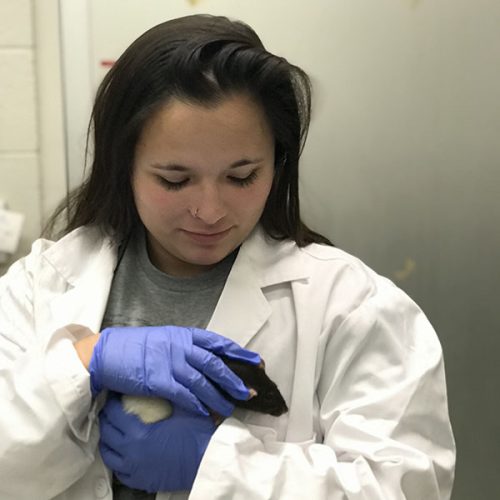