Discipline leads alumni from professional careers to art of taekwondo

After training in and teaching taekwondo for more than 30 years, Mark Henkel ’70 and Hilde Bormann Henkel ’73 of Rudolph, Wisconsin, now run Stevens Taekwondo Academy at the Stevens Point YMCA.

The couple both came to Ripon College as National Merit Scholars. They both had had family members attend Ripon, and the small-town setting added to Ripon’s appeal for them, but they say, “The bottom line was … Ripon offered us significant scholarships.”

Mark Henkel majored in politics and government, and his career as an attorney “certainly benefited from the broad basis of studies at Ripon, the liberal arts and the sciences, … leadership training and excellent instructors.”

Hilde Bormann Henkel majored in chemistry and chemistry-biology, which gave her logical problem-solving skills and clear writing abilities that “helped during my 18 years on the Wood County Board and freelance writing for the local newspapers,” she says.

After the Henkels graduated, married and started a family, they developed a passion for fitness that manifested in taekwondo, a sport they and their children have since incorporated into their daily lives. Mark Henkel and his sons first obtained their black belts, then they began training Hilde.

“Taekwondo is a traditional art which emphasizes respect and courtesy,” Hilde Henkel says. “Thus, in class, I bowed and called (my husband and sons) ‘sir.’ I gained a lot of respect for the teaching skills and patience they showed me.”

Throughout their children’s high school years into the present, the family practiced alongside one another at a time when “many parents see little of their children except from the sidelines,” Hilde Henkel says.

The couple both grew up in less-advantaged situations and reflect on Ripon College as a revelation for being able to mix with a variety of people. Hilde Henkel says Ripon helped to build her self-confidence, and Mark Henkel is grateful for learning leadership and applying it through the military science department. 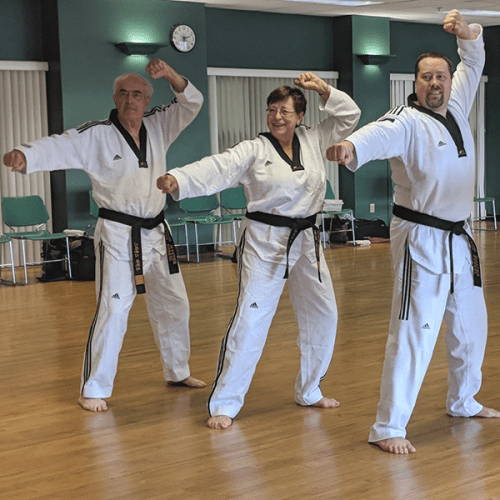