Kate Hersey ’04 of St. Paul, Minnesota, was featured in an article in July in the Star Tribune newspaper in Minneapolis. “Minnesota Tool Library offers 5,000 tools for nominal annual fee” highlights the nonprofit of which Hersey is the executive director. The library lends tools to members, offers classes to the public and has workshop space.

“ … Beyond the cost savings, which can be considerable, and the landfill issue, think about all the resources that go into making that item, and the amount of time it’s going to go unused between projects,” she says in the article. “Do you really want a sawhorse, air compressor or huge ladder sitting in your garage if you’re not doing projects regularly? If the option exists in your community, why wouldn’t you choose to share?

“Low-income families tell us how the library helped them tackle deferred maintenance on their new home. People have built out accessible ramps for family members, crafted beautiful gifts for friends and upcycled furniture destined for the dumpster. One couple converted an old school bus so they could live in it and travel.

“With even the simplest projects — painting a room, putting up crown molding or building that raised garden bed — it’s visceral and rewarding. There’s something incredibly satisfying about saying, ‘I did that.’”

At Ripon College, Hersey majored in English with a classical studies minor. 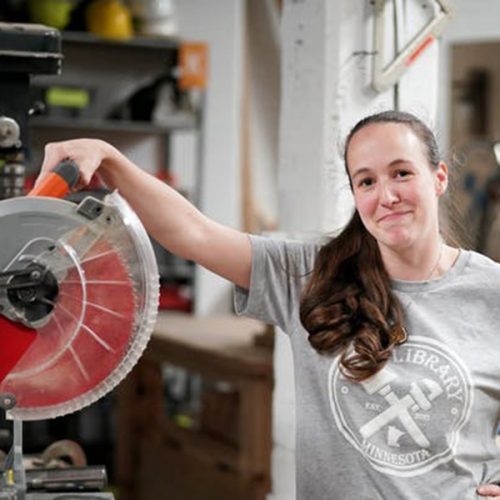