Ronald Bolding ’71 of Claremont, California, was featured in a profile article Oct. 22, 2019, on mcknightseniorliving.com. Bolding has been named the CEO of Pilgrim Place, a continuing care retirement community in Claremont, California. He previously had served for eight months as the interim president and CEO. At Ripon College, he studied economics and history.

Bolding served in the U.S. Navy for 28 years in active duty and reserve, retiring with the rank of captain. He was awarded both the Navy Commendation Medal and the Joint Service Commendation Medal.
Following his military career, Bolding worked in the management of healthcare institutions, including extensive responsibilities for infrastructure and facilities. 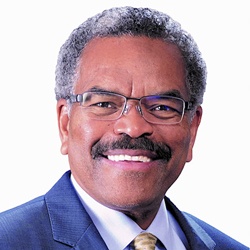