A major in politics and government at Ripon College has impacted the career of W. Andrew Voigt ’97. He currently is a circuit court judge for Colombia County, Wisconsin. He has general jurisdiction, which means he can hear cases on everything from small claims to homicide.

Voigt also minored in law and society at Ripon College. He earned a law degree from the University of Wisconsin-Madison in 2000.

For Voigt, deciding to attend Ripon College was an easy choice: it was close to home, it had the best academic record of the schools he was interested in, and Ripon had the potential to continue to grow.

Voigt says the understanding of politics that he gained at Ripon College is especially helpful to his work as a judge, as that is an elected position. He also credits numerous communications classes he took with Professor of Communication Jody Roy, who, he claims, did more to prepare him for law school than anyone else.

The most rewarding parts of his Ripon College experience, he says, were being challenged more than he had ever been before and being forced to become a better student because of it; as well as the connections that he made — classmates with whom he has kept in touch and alumni he has met from other eras of Ripon College. These connections allowed him to build a curling team a few years ago made up entirely of Ripon College alumni.

Voigt is glad to see what Ripon College has become and remains to be, and to have served on the Alumni Board for a few terms. His time on the board allowed him to reconnect with the campus and to remind himself of how much Ripon helped him to become who he wanted to be. 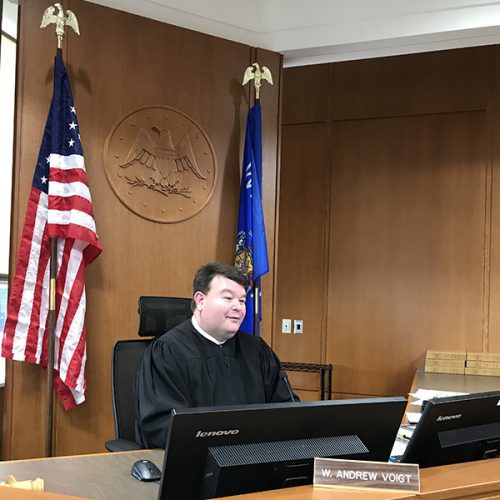