In the summer of 2018, Abby Korb ’20 of Burlington, Wisconsin, had a personal experience with Kamala Harris, D-Calif., the newly named running mate of presumptive Democratic presidential candidate Joe Biden.

Korb was working for the re-election campaign of Sen. Tammy Baldwin, D-Wis., supported by a Internship Supplemental Grant from the Center for Politics and the People (CPP) at Ripon College.

“We were hosting a large surrogate event and rally in Milwaukee,” Korb says. “In campaigning, surrogates are typically used as a way to draw in more people, or used to campaign on behalf of the candidate. While Sen. Baldwin was still there, the hype was really surrounding Sen. Harris. Working on the campaign, we spent a lot of time prepping for this event, calling people and getting people there, and even coached on how to pronounce her name correctly. (It’s Comma-La).”

Sen. Baldwin introduced Korb to Sen. Harris briefly. “We chatted about what I was doing, took our picture and left,” Korb says. “At the end of the event, I was leaving with my family at the same time Sen. Harris was leaving. She remembered me as ‘Abby, the Intern,’ and we talked about how I, too, hoped to be a senator one day. She gave me advice on running for office, and I very distinctly remember her telling me I needed to learn coding, something I still haven’t done. She also complimented me on my apparent leadership skills and wished me luck, as we need more women in office. I was blown away, and it’s a moment I’ll never forget. She is a wonderful and kind individual, and makes it apparent she takes the time to be personal with the people she meets.

“I’m very excited to see this Biden/Harris ticket, as it is time that we have a woman of color on a ticket. I’m excited that I am able to say that I’ve met her, and I hope that next time, there’s a woman in the presidential spot.”

Korb was a double-major in politics and government and psychology. She served as vice president of the Ripon College Feminists and a member of the College Democrats, and she was a student representative of the CPP. 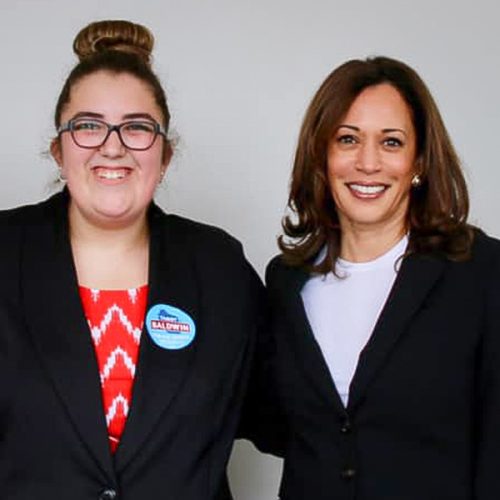