“Publishing a paper is a huge milestone that I pictured being far away, so the fact it’s official is still hard for me to fully grasp,” says Ray Allen ’15 of Lac du Flambeau, Wisconsin.

The paper, co-written by Assistant Professor of Biology Barbara Sisson and Professor of Biology Bob Wallace, focuses on zebrafish, something Allen studied at Ripon as part of the McNair Scholar’s Program. The program is a U.S. Department of Education initiative funded at Ripon and designed to guide high-achieving first-generation, lower income and racially underrepresented students to graduate from school, with a number of scholars then entering Ph.D. programs. Allen is enrolled in a biology Ph.D. program at Duke University in North Carolina.

“Ray approached me in the spring of 2013 to develop a project for that summer as part of the McNair Scholars program,” Sisson says. “To conduct the summer research, Ray had to develop the techniques that we described in the paper.”

Allen’s research looked for cost-effective ways to raise zebrafish. “Zebrafish are significant in science because they allow researchers to study interesting and important biological problems that can’t be done in other animals,” Allen says. “An example being regeneration.”

Larger universities often have an entire facility full of expensive equipment dedicated to raising the fish, which is not feasible for smaller schools.

“Our technique utilizes common household items such as two-liter soda bottles, fluorescent lights and small aquariums that are available at the pet store,” Sisson says. “We hope that by sharing the techniques we use to raise zebrafish, other researchers and educators can maintain their own zebrafish colonies.”

In addition to zebrafish, the paper focuses on microscopic aquatic organisms called rotifers. “Rotifers are of great importance for research because they allow biologists to study ecology and evolution,” Allen says. “These aquatic creatures greatly influence the food chain and offer an exciting look into how animals survive extreme environments.”

Sisson praises the collaboration that brought together two Ripon professors and a Ripon student. “This publication allowed me and Ray, who study developmental biology, to work with Bob Wallace, who is a freshwater ecologist,” she says. “Bob shared his rotifer expertise with us, and together the three of us were able to establish a technique to raise zebrafish larvae in small academic settings. It was a pleasure to work with both of them.”

Allen says the McNair program changed his life in many ways over the course of two years. “The research I’ve done, the career path I’m pursuing and the people I’ve gotten to know due to my McNair experience led to who I am today,” he says.

Publishing work this early in his career is very exciting for Allen. “When first introduced to scientific research, you quickly learn that publishing your work is everything. Not only because it showcases what you’ve been working hard at, but also because this work is needed to progress the field and aide fellow researchers in their endeavors.” 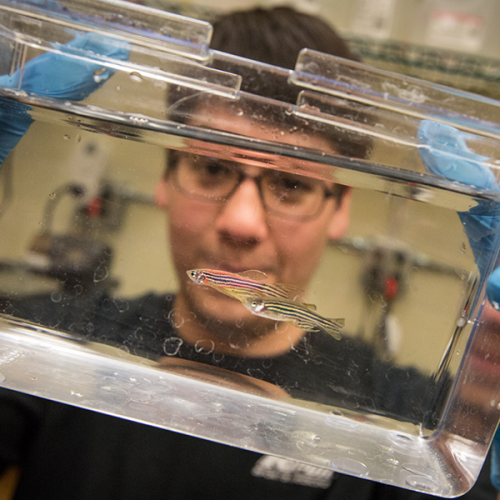