Waiting for Godot, by Samuel Beckett, a 20th-century tragi-comic masterpiece, will be presented Oct. 5-8 at Ripon College. Performances will begin at 7:30 p.m. in Benstead Theatre, C.J. Roadman Center for the Arts, on the campus. Tickets are free, but reservations are recommended by calling 920-748-8791; or emailing [email protected]

The tramps pass the time in ways that seem remarkably like the way all of us pass our days: in conversation, domestic squabbles and makeups, entertaining guests, having lunch, struggling with inexplicable forces beyond their control, entertaining themselves, being entertained by others and generally finding themselves in the process of seeking a meaningful life and an ordered existence. The tramps are “everyman” figures in a world they are struggling to understand.

According director and Ripon College theatre professor Robert Amsden, “It is one of the greatest plays of all time, including works from Shakespeare and the illustrious classical Greeks.” He adds, “Rather than being thought of as elitist and obscure, it has always seemed to me to be unsettlingly like ‘real life,’ but an artistic copy. While the play’s situation expands so that we begin to consider our own place in the universe, it does so with humor, slap-stick comedy, funny routines and the vaudeville technique of ‘cross-talk’ — rapid exchange of dialogue building to quickly to a climactic and humorous conclusion.”

Beckett (1906-1989), wrote several novels and plays, including Endgame, Happy Days and All that Falls, rooted in existentialism and is categorized a “theatre of the absurd” artist. The term, however, is misleading to contemporary culture where “absurd” has come to mean silliness or non-sense. This is anything but the case for Beckett’s plays which are profoundly insightful into human existence. The word “absurd” originally meant “dis-harmony” or “out of tune” and was intended to reveal that an individual is dis-associated or disconnected from his or her surrounding universe. Beckett is described as having “a truly creative imagination, as distinct from merely an imitative one.”

The play has enjoyed recent success in a revival featuring the famous English actors Ian McKellen (Gandalf in Lord of the Rings) and Patrick Stewart (Capt. Picard in Star Trek: The Next Generation) that played in London and New York.

Associate Professor of Theatre and Department Chair John Dalziel is the scene, sound and lighting designer; and Susan Hill is the theatre department’s costume designer, costumer and shop supervisor. 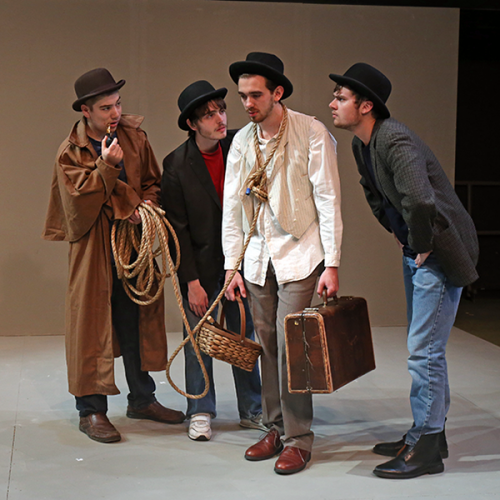