Fiction writer emily danforth will appear at Ripon College Wednesday, Feb. 15. Her reading will begin at 7:30 p.m. in Lane Library. It is free and open to the public. Danforth is appearing as part of the Visiting Writers’ Series at Ripon.

Danforth’s debut novel, The Miseducation of Cameron Post, was the winner of the Montana Book Award and finalist for the American Library Association’s William C. Morris Award for a Young Adult Debut and a Lambda Award in Young Adult. During the summer of 2014, The Miseducation of Cameron Post was banned from a reading list by the Cape Henlopen school board in Delaware, which resulted in it becoming part of a national conversation about LGBTQIA literature and censorship. A film adaptation of the novel, written and directed by queer filmmaker Desiree Akhavan and starring actress Chloe Moretz in the title role, is forthcoming.

Her second novel, Side Talks With Girls, was written partially during a fellowship at the MacDowell Colony. It is forthcoming from HarperCollins Publishers.

Danforth’s short fiction has won the International Queer Writing Award from the U.K.’s Chroma Magazine and the George Garret Award from Willow Springs, and her nonfiction has been featured on NPR’s All Things Considered. She is an associate professor of English at Rhode Island College, where she teaches creative writing and literature courses while living Providence with her wife and two dogs. 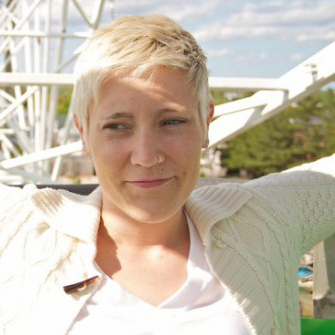