Associate professor of art co-edits, writes chapter in new book about the Maya

A book co-edited by Associate Professor of Art Travis Nygard, Landscapes of the Itza: Archaeology and Art History at Chichen Itza and Neighboring Sites, has been released. He also co-wrote a chapter in the book, “To Face or to Flee from the Foe: Women in Warfare at Chichen Itza.”

Chichen Itza is significant historically as one of the largest ancient Maya cities, thriving from about 600-1200 CE. It has been recognized as a UNESCO World Heritage Site, and it is one of the most visited archaeological sites in the world. The site contains a large stepped pyramid, a huge natural well called the Sacred Cenote, and large amounts of sculpture and murals.

The site was the capital and trading hub of the late Maya civilization and continues to fascinate visitors and researchers with unanswered questions about its people, rulers, rituals, economics, religion, politics, and even chronology. This book is an update on recent archaeological and art historical work being done at Chichen Itza, offering new ways of understanding the site and its role in the Yucatan landscape.

Nygard’s personal chapter focuses on a set of murals in two temples that have rarely been studied. “These are battle scenes that are traditionally interpreted as showing a conflict between Maya and Toltec peoples,” Nygard says. “What had never been analyzed before is how women were portrayed in the imagery. We thus focused on them. The images can be difficult to look at, as the women seem to be traumatized. They are generally shown fleeing, sometimes with children or bundles of possessions on their backs, and in some cases they are shown being brutalized.

“That said, women are not simply shown as victims at Chichen Itza. In the second temple, the Lower Temple of the Jaguars, there is a set of murals that show a female warrior in a procession, dressed for battle. This is thus a case in which women seem to have played an integral and complicated role in warfare.”

(Photo: Image of the female warrior) 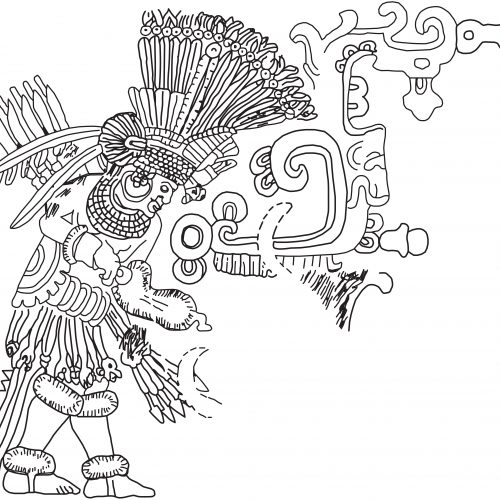