“My family has a long and rich history with Ripon, having had many members prior to me attend, and my dad, Chuck Larson, was a coach and professor,” says Charlie Larson ’00.

“However, that didn’t make it an automatic that I was going to attend Ripon. I looked at a number of other liberal arts colleges and in the end chose Ripon because of the small class sizes, easily accessible professors and the chance to continue to play tennis at a high level while still being challenged academically.”

Larson majored in history with a minor in philosophy at Ripon College. He currently is the vice president of communications with the Milwaukee Admirals professional ice hockey team.

“The specific subject matter in those classes doesn’t exactly apply to what I’m doing now,” he says, “however, in general, my classes at Ripon forced me to become a better communicator and critical thinker. Professors didn’t just want to know what happened on a certain date, but why it happened, and I think that is one thing that can really help young professional in the sports industry succeed. The more you ask why, the more you will come to understand how all of the gears in an organization work together to a common goal.”

He says that one of his work study jobs at Ripon was in the sports information department, and that introduced him to the possibility of working in sports after he was done playing them. With the Admirals, he is in charge of all communications from the office, including overseeing all social media efforts, website and other digital platforms, and he serves as the primary liaison between the organization and the media. He also plans all community relations activities such as taking players to schools to read or visiting youth hockey practices.

“I thoroughly enjoyed my time at Ripon and made many lifelong friendships — including my wife (Kersten Holm Larson ’00)!” he says. “I always felt one of the best things about Ripon was that you knew everyone and everyone knew you. And it wasn’t just the students, but the professors and staff as well. Plus, there was the ability to get involved in the campus community in so many different ways that just aren’t available at bigger schools.” 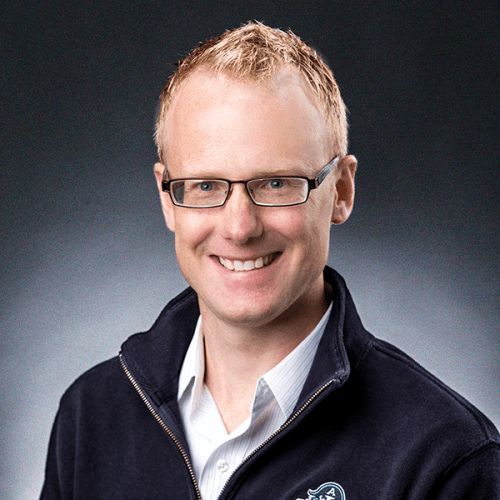