The iconic image of World War II-era Rosie the Riveter was the basis of a senior seminar research project by Madeline Hantzsch ’19 of Wauwatosa, Wisconsin. Hantzsch, who is majoring in studio art and minoring in psychology, examined Norman Rockwell’s depiction of Rosie the Riveter and the influence that went into the historical piece’s dynamic pose.

Rosie the Riveter was the star of a campaign aimed at recruiting female workers for factories and shipyards during World War II. She represents American feminism and women’s economic power. Rockwell’s image appeared on the cover of the Saturday Evening Post on Memorial Day, May 29, 1943.

Hantzsch compared Rockwell’s Rosie with the more mainstream “We Can Do It!” Rosie. She also compared Rosie the Riveter with Renaissance, Baroque and present-day depictions of women in general. As she continued constructing her project, Hantzsch worked on maintaining a balance between her own opinionated observations and actual credible research.

Hantzsch now has a new appreciation for Rockwell’s Rosie. “She is, in many aspects, much different from the ‘We Can Do It!’ Rosie that everyone is so familiar with, and — not that it isn’t still a great piece or has any less impact than it already had — it was rewarding to learn so much about how each Rosie has been empowering and impactful, particularly during two different eras,” she says.

The greatest personal takeaway from her research is being able to appreciate art in a new light, she says. “When you learn about art and its history, you gain an understanding that all art is inspired by someone else’s work in one way or another, but it becomes even more fascinating when you find work that you can directly see the inspiration behind,” Hantzsch says.

“Being able to discuss … with the professors here in the art department helped me make these connections not only when researching specifically for Rosie, but also when finding other images to support parts of my presentation,” she says. 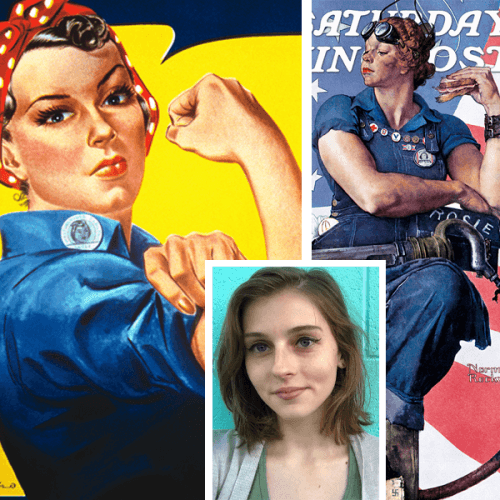