Al Jarreau ’62 remembered on 80th anniversary of his birth

“Al Jarreau: The Most Gifted,” a personal recollection of the life and career of the late jazz/pop vocalist Al Jarreau ’62, appeared March 10, 2020, in The Berlin Spectator. The English-language news and features site is about Germany and is focused toward expatriates, migrants, people around the world and Germans. Jarreau would have turned 80 years old today.

At Ripon College, Jarreau majored in psychology and was a member of the vocal group The Indigos. 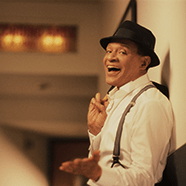